All eyes will fall on Edgbaston on Saturday as the Birmingham venue plays host to the now traditional T20 Finals Day with the four remaining teams going head-to-head for one of the biggest prizes in domestic cricket.

The T20 Blast has been going on all summer up and down the country and the final four will meet on Saturday to decide who will be the latest name on the trophy.

There will be a packed house at Edgbaston with the two semi-final matches and the final all taking place on the same day and as the betting suggests, it is a wide open field with all four teams capable of lifting that trophy on Saturday night. There will be plenty of star names on show for all four sides with the England players released to play in the matches and they could well be the key here with fine margins likely to decide the outcome of the tournament.

The first semi-final of the day will see Surrey take on the Birmingham Bears who will be hoping that home advantage will be enough to see them into the final. Surrey go into this semi-final as the glitzy team but their star names will need to perform against a Birmingham side who punched above their weight just to make the last four.

The majority of the attention will inevitably fall on Kevin Pietersen who is flying in from a spell in the Caribbean Premier League to play for Surrey as he continues his globe-trotting T20 career. The former England batsman remains exiled from International duty but he will surely relish taking centre stage for Surrey on such a big occasion like T20 Finals Day. His form has hardly been impressive over the past few months though and there are plenty of others in the Surrey team who are capable of chipping in with big plays. Jason Roy has been one of the stars of the summer for Surrey and will be key this weekend with the bat, while Azhar Mahmood remains a key all-rounder with plenty of experience.

As for Birmingham, they start T20 Finals Day as the outsiders of the four to win the trophy but their surprise quarter-final win against Essex showed they are more than capable of upsetting the odds. Ian Bell is likely to playing after his success with England while Kiwi spinner Jeetan Patel is perhaps the key man with the ball after an excellent summer.

The second semi-final of the day is another potential cracker with two excellent teams set to meet for a place in the Final. Hampshire have been the most consistent side in English T20  Cricket over the past five years and have been here on finals Day time and time again which might well give them the edge when push comes to shove. Lancashire are however packed full of star names and they have shown this summer that they are one of the best T20 sides in the country which makes this a potential classic.

Hampshire will be making a remarkable fifth consecutive appearance at finals Day and that is down to a number of players contributing this season. James Vince and Michael Carberry have been in fine form at the top of the order, while Matt Coles has proven to be a top quality all-rounder in domestic cricket and will be important for them. Owais Shah has been drafted in to replace Glen Maxwell, who has returned to Australia, and he is hugely experienced at this level and could make a major impact in the middle order.

As for Lancashire, this may be their first ever Finals day but they have plenty of talent at their disposal this weekend and plenty will fancy them to go all the way. England stars Jos Buttler and Jimmy Anderson are expected to play which is massive boost, although there might not be such good news surrounding Andrew Flintoff who is struggling to be fit. Flintoff has hardly played since returning to the game and if he were to be in the Lancashire team that would surely give them a big boost against strong opposition.

Overall it is shaping up to be a thrilling day of sport with all four teams capable of wowing the crowd with the fans heading to Edgbaston in for some fireworks this weekend. All four are capable of lifting the trophy but it is the second semi-final between Hampshire and Lancashire which looks likely to produce the winner and set up a final against the home team who can upset Surrey in the first semi.

The victor of the first semi-final will have the benefit of not having to wait around too long for the final and with that in mind, it is impossible to ignore the claims of Hampshire who have too much experience at this level which ensures that backing them to lift the trophy at 9/4 with Paddy Power looks like the value punt. 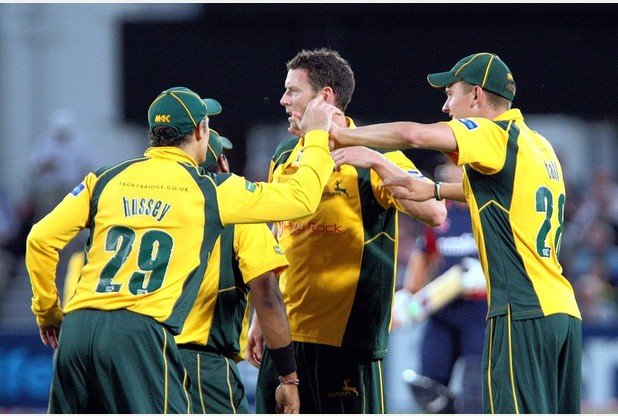