Kevin Harvick is currently dubbed as, “The Closer”, but with a huge victory this past Sunday, he might be called 2015 Sprint Cup Series Champion after next weekend’s season finale in Homestead.

Sunday’s race was a pressured filled event as all eight chase eligible drivers still had the opportunity to race their way into the championship round. Realistically though, Harvick like Carl Edwards and Brad Keselowski knew that the only shot they had at making the championship round was to win in Phoenix. Harvick not only clinched his spot in the final four, he sent a powerful message to the entire field that the Budweiser team is ready to go to war and win the championship.

Harvick dominated the majority of the race Sunday as he led 264 of 312 laps but he had to hold off a hard charging Jeff Gordon late in the race. The clutch moment sealed Harvick his spot in the final four and Harvick spoke about the importance of winning.

“Wow, I guess that’s what it feels like to hit a walk-off in extra innings there. I could tell that we were probably going to have to win, because everybody was running up in the front of the pack that we were racing against.”

While Harvick celebrated his third straight victory at Phoenix, Jeff Gordon was left to wonder what might have been as he came up 1 point shy of keeping the drive for five alive.

The final four drivers that will chase for the championship next Sunday was set as Harvick, Denny Hamlin, Joey Logano, and Ryan Newman made their way in but Newman’s last lap bump and run on Kyle Larson for 11th, had drivers talking after the race including Newman.

“I didn’t take him out, In a day or two, he’ll understand. It’s hard to rationalize that, but I did what I had to do. I don’t like racing that way.”

The move pushed Newman into the championship round while Jeff Gordon missed the final round and questioned the tactics of Newman. “That’s the system we have, I mean, I could have taken out Harvick, too, to make it in. But I didn’t.”

Denny Hamlin and Joey Logano’s road to the championship round was certainly a bumpy ride in the Phoenix desert, but neither driver let early race issues ruin their opportunity of becoming the champion. Hamlin and Logano both had issues early in the race that forced them to come back from a lap down and then drive through the field. Hamlin finished fifth and Logano sixth.

Hamlin came so close to the championship in 2010 as he lost to Jimmie Johnson after a disaster in Phoenix, but this time around, Hamlin sounds confident in his chances of redeeming himself next Sunday.

Logano has won five times on the Cup circuit this season and has a legitimate opportunity to win owner Roger Penske his second Cup title in the past three seasons. “It’s all about how good your team is, and I feel like I’ve got the best team,” Logano said.

So with the final four set for their showdown next Sunday at Homestead, the only thing that we can guarantee is that we will see a first time champion as none of them have won the biggest crown in stock car racing. Next Sunday’s race should bring out the absolute best in all four drivers and fans can be in store for one of the wildest finishes to a season in NASCAR history.

Thanks to ESPN.go.com and the Associate Press for the Quotes. 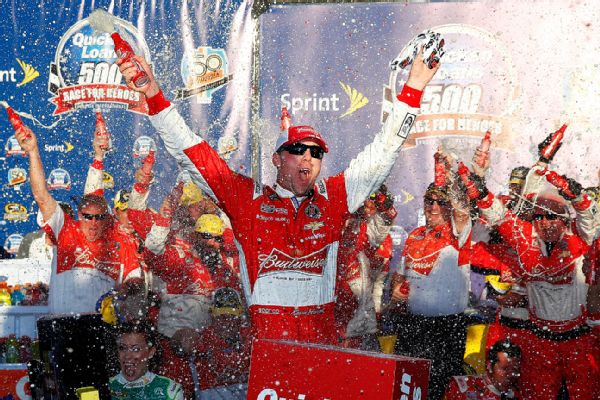