Portrait painter Natalie Holland paints people who both inspire and provoke her. In 2010 she was watching athletics on the TV and became entranced by a character known as The Blade Runner. He was a double amputee who was aiming to be the first disabled person to run in the ‘regular’ races in the Olympic Games: Oscar Pistorius.

After their first meeting Natalie was consumed by Oscar’s remarkable story and his ambition. This resulted in the portrait The Blade Runner in 2010.  Her fascination with Pistorius continued to grow: she had discovered a new muse. They agreed to meet again and this resulted in a second portrait the same year – Just Oscar.

At the 2012 London Olympics, Natalie watched Oscar as he won the gold medal. This inspired her to paint a third and concluding portrait in the series, celebrating Oscar’s success in reaching his dream. A short time after she had started her initial work on the painting, she received a message.  Oscar had shot and killed his girlfriend.

The work on the portrait stopped immediately but almost presciently, Natalie had deviated from her usual method. Normally, she begins work with the background and then, layer by layer, she develops the individual in the foreground. However, her strong emotional connection to Pistorius somehow forced a change of routine. This time she started with the man,  and had almost completed the face and one arm when she received the news.

She felt unable to continue with the painting. So, there he is, immortal but incomplete.  Yet unlike another portrait written about by another Oscar over a century ago, this one will never age or betray the sins of the sitter. 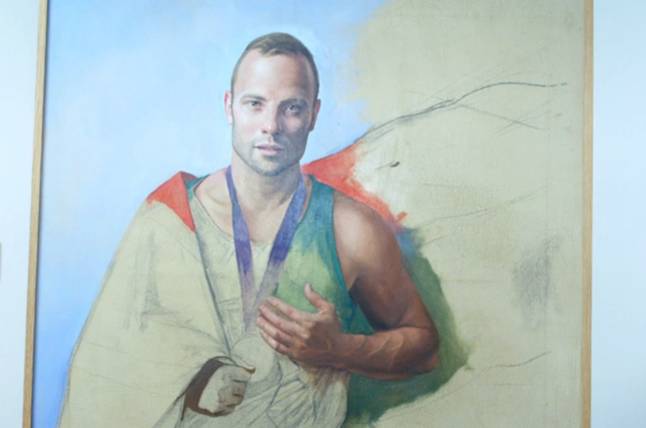