The stage is set at MCG for the first ever Trans-Tasmania world cup final. Neighbors and co-hosts of the 11th ICC World cup, Australia and New Zealand have overcome 12 other nations and booked their spot in the final of the tournament. They are one win away from glory. Should Australia emerge as winners, they will become world champions for the 5th time in history. The Kiwis on the other hand, await their maiden world cup glory!

Prior to the tournament, pundits declared both the teams as favorites. And how befitting as both the teams proved throughout the world cup that they indeed were worthy of the tag. After 48 matches, they remain as sole survivors, focused on winning the trophy.

Having reduced the mighty Aussies to just 151 after a brilliant performance from Trent Boult(5/27), skipper McCullum cruised his way to 50 and was posing a threat to the Aussie bowlers.

However, as they did all through their glorious years, Australia fought back as Mitchell Starc picked up 6 wickets and the Kiwis were down to 146/9. Kane Williamson was the ultimate hero as he hit a six from the first ball of the 24th over, steering his side to victory!

Brendon McCullum’s side did not face any tough competition in the rest of their group matches. Their bowlers and top order batsmen peaked at the right time and the team was unstoppable throughout the tournament!

They faced South Africa in the semifinals and chased 299 in 42.5 overs with 4 wickets in hand, before a strong performance from the Proteas. Ultimately the Kiwis prevailed after misfielding and dropped catches from South African players as well as an unbeaten 84 run knock from Grant Elliot.

Guptill scored 532 runs in 8 games for the Kiwis and ranks second in the top run-scorers’ list. Boult sits atop the bowlers list, picking up 21 wickets in 8 games. Vettori and Southee have 15 wickets each and Anderson has 14! The numbers depict a dominant bowling line-up of the Kiwis.

However, one of their key weaknesses is their middle order, who seem to be a bit shaky as most of the runs have come from the top order. The other weakness of the Kiwis is that they have not played any competitive cricket on Australian since 2009 and it is harder to swing the bat and ball at MCG than on Kiwi soil. This might become a problem for them once their batsmen start facing the Aussie pacers Starc, Johnson, Hazlewood and Faulkner.

Despite these lacking, if McCullum, Guptill, Elliot, Anderson, Vettori, Boult and Southee perform to their level in the finals, the Kiwis will see the dream of winning their maiden world cup materialize at the MCG on Sunday!

Australia started their tournament with a convincing 111 run victory against England. Their match against Bangladesh was abandoned due to rain. They lost to New Zealand in a close encounter with Starc(6/28) being the hero for his side! They have not looked back since then, picking up 5 straight wins in the process of qualifying for the final.

Australia beat Sri Lanka in their group match as well as arch rivals Pakistan and India in the quarterfinal and semifinal. None of the Asian giants stood a chance against them in those matches. Maxwell and Starc were the heroes for Australia, performing consistently with the bat and ball. Starc picked up 20 wickets in 7 games, sitting at no. 2 in the wicket-takers’ list. All rounder Shane Watson regained his form against Sri Lanka and Steve Smith scored a century against India, sending the message that they were ready to challenge the Kiwis for the title.

Hazlewood, Johnson and Faulkner have also been amazing with the ball. Their performances led to Cummins and Marsh being benched despite playing well in the matches they featured. Steve Smith is the top scorer for Aussies with 346 runs from 7 games. Johnson ranks second among Australian bowlers with 12 wickets.

One of the key weaknesses of Australia is the absence of a regular spinner. They have not featured Doherty regularly and much of the spin bowling has been done by Maxwell. Clarke too has spun the ball when required. But this decision can haunt them in the final as it is well-known about McCullum’s inconvenience of batting against spinners. If Maxwell steps up his game with both bat and ball in the final, Australia can heave a sigh of relief. Nevertheless, with all their batsmen and pacers in form, Australia are the favorites to win the world cup this time.

We saw a thriller when these sides clashed in the group stage. With the world cup trophy at stake, we can expect another thriller tomorrow. Michael Clarke has declared the final as his last ODI for Australia. His teammates will try to give him the best retirement gift by winning the world cup trophy. The Kiwis on the other hand, will do the same for their veteran warrior, Vettori!

Will New Zealand succumb under the pressure of playing in a world cup final? Will Australia emerge as the winner and clinch their 5th world cup trophy? With so much to look forward to, don’t forget to catch all the cricketing action from MCG, live tomorrow at 14:30 local time. 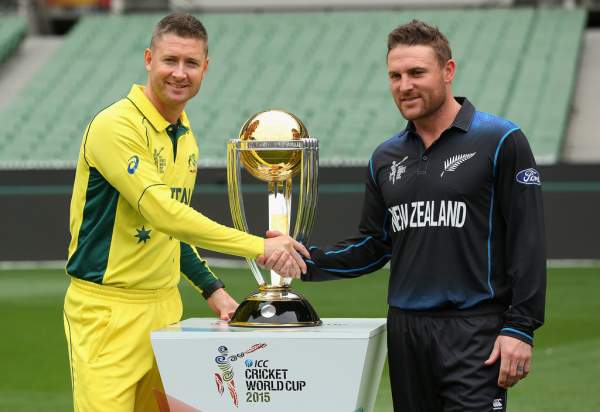