Tuscaloosa, AL– The Iron Bowl that comes to us this weekend has a big brother that it will hopefully outperform, if that’s even possible–that big brother is last season’s game. If you remember, Chris Davis of Auburn returned a muffed field-goal over 100 yards to win the game for the Tigers.

It was a tie game before that, and Alabama was in the process of establishing a very efficient offensive drive. That’s when Alabama running back T.J. Yeldon was forced out-of-bounds on a running play by Auburn’s defense, but there was a dispute about whether or not time had expired before Yeldon’s feet touched down out of the field of play.

It was determined that there was less than one second left, but enough for one last play. Alabama figured why not go for a field goal, what’s the worst that could happen…right?

Davis’ return turned a 28-all contest into a 34-28victory for Auburn and left Alabama in absolute shock. This victory was a huge determining factor in Auburn’s road to the national title game against Florida State last season.

Although Auburn’s playoff chances are pretty much dashed (they’re #15 nationally and have three losses), they can play spoiler. And with last season’s miracle coming back into memory, Nick Marshall & Co. would love nothing more than to jack up the playoff picture going into the final week of the season.

Personally, I am taking Auburn in this game. I feel that B.J. Simms, Alabama’s QB, will crack under the pressure and the spotlight of being the new #1 team in the country. With that remarkable achievement comes a ton of responsibility that could easily overwhelm Simms who must step up for the Crimson Tide to have a title chance. 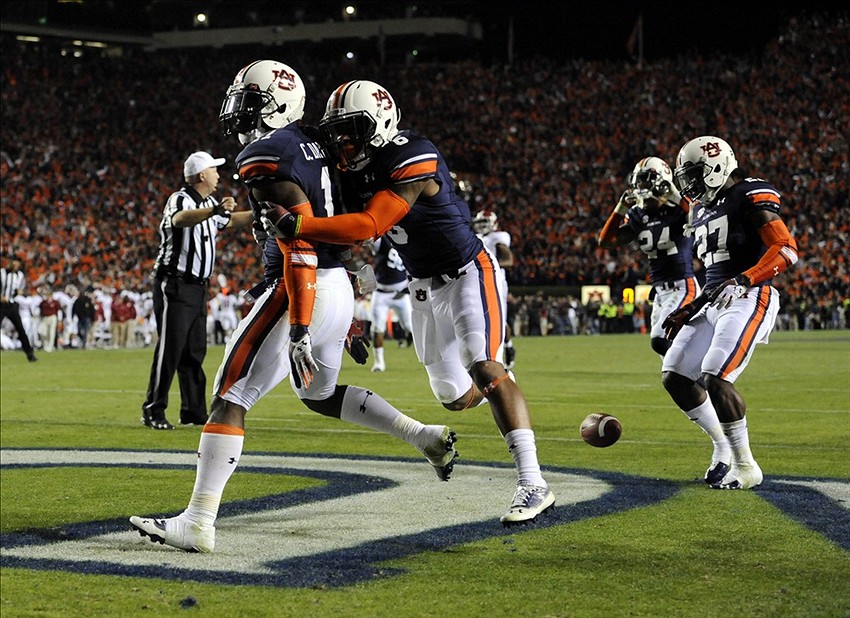