Skip to content
You are here
Home > US Sports > NBA > Is Draymond Green the NBA’s Best All-Around Player? 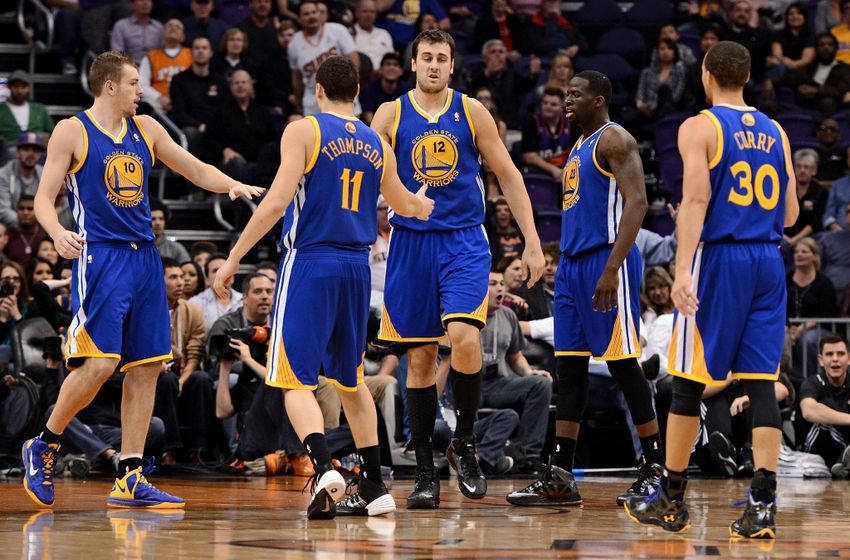 A few seasons ago, Draymond Green was nowhere near essential to the Golden State Warriors on the court. He was drafted in the second round of the 2012 NBA Draft, headlined by the Kentucky Wildcats product Anthony Davis. Back in 2012, NBA.com described Green as a “do-it-all small forward that could have great value.” Also, Adam Formal of Bleacher Report said “he’s not a great athlete, but his shooting and versatility are solid enough for him to make an impact at either small forward or power forward.” Green has always been regarded as a jack of all trades; however, he wasn’t able to fully display his talents until last season.

Fast forward past his boost in minutes, emergence during the Warriors championship run, and subsequent All-Star appearance to present day. Following their Game 1 playoff bout against the Portland Trail Blazers, Warriors big man Andrew Bogut made a statement to the media about the Michigan State alumni. Bogut was quoted saying “he’s probably the best all around player in the league at this point.” Many basketball enthusiasts question the credibility of this claim due to the clear bias that the Aussie has for his teammate. He sees Green put in the work and the effort on a daily basis, watching him develop into the player he is today. Green works tirelessly on the offensive and defensive end, perhaps possessing the title of the Warrior’s Most Valuable Player. While Bogut’s quote might have been shocking to hear, it’s not that far-fetched.

Since Green’s rookie season with Golden State during the 2012-13 season, his minutes have increased each year. With his minutes rising as the seasons progressed, his production per contest rose as well. It might have taken a change in coaching from Mark Jackson to Steve Kerr to push forward his development, but eventually Green begun to flourish. He flashed in spurts throughout his first two seasons what he was capable of becoming once he was fully given the green light. He has incredible vision and can legitimately play the point guard position at 6’7. Green was the only non guard, not named Lebron James, ranked in the top 10 in assists per game with 7.4.

Along with his impressive vision, passing, and basketball IQ, Green is a superb shooter beyond three point territory. As he matured in age, his jumpers matured as well. His rookie season he only shot 20% from behind the arc, but eventually skyrocketed to nearly 40% this past regular season. His consistent jumpshot constitutes him as a perfect fit in the modern NBA where big man should be able to spread the floor. No longer can centers and power forwards be left wide open from 22 feet compared to decades prior.

“DrayMagic”,the nickname bestowed upon him by Isiah Thomas, can do way more than just spread the floor at his position and pass the rock efficiently. He is an exceptional defender and nonstop rebounder. Green finished top 10 in four rebounding and defensive categories. He was top 10 in total rebounds and defensive win shares, while also being top 5 in defensive box plus/minus and total defensive rebounds. On top of that, for the second consecutive year, Green finished second in the NBA Defensive Player of the Year Award voting to Spurs forward Kawhi Leonard. The 25-year-old is an elite defender with really only two seasons of steady playing time under his belt; that shouldn’t be taken lightly.

He makes such a significant impact on the final outcome of every Warrior game. The first time All-Star finished second in total triple doubles with 13 to Russell Westbrook’s 18. Green is the definition of a stat sheet stuffer every contest he participates in. Before the final buzzer sounds, Green ensures that he puts his stamp on the box score. Green may even be too  insistent that his presence is felt; sometimes to the detriment of his team. Nonetheless, he is the glue that holds the Warriors together on both sides of the floor. His extraordinary two-way play was major to their record-breaking performance of winning 73 games.

There aren’t a substantial amount of players that can do the amount of work that Green does every time he steps on the court. He handles the ball, when it’s not in Steph Curry’s hands, rebounds the basketball, leads fast breaks, blocks shots, defends every position efficiently, shoots accurately, and brings a certain fire to the locker room that is necessary of a leader. Bogut might have turned heads with his proclamation, but it wasn’t inaccurate. Of course there are notable names that come to mind when listing all-around amazing players. Westbrook, Lebron James, and Anthony Davis; just to name a few. However, they each have weaknesses that puts them out of contention of being the best all-around player.

Westbrook may rack up a ton of assists, but he reverts back to “Russell Chuckbrook” too often. He’ll race down the court with a head full of steam and tends to play hero ball. Green has a higher basketball IQ in terms of understanding the right decision to make and reading the play/defense. Not to mention his jack of all trade talents didn’t end in the regular season. He showed up when the lights were the brightest and acquired an NBA Championship, something Westbrook has yet to accomplish.

Davis doesn’t have playoff experience, besides getting handled by the Warriors during last year’s postseason. Additionally, after receiving such a massive contract over the off-season his Pelicans didn’t reach the playoffs out West. The NBA’s all-around best player should be able to make his teammates better and lead games to victory. For example, the Warriors lost their superstar to injury several times during the regular season. That didn’t stop Green from putting on a show and improving those around him. On December 31, Curry didn’t not play but Green still collected 10 points and dished out 16 dimes. Also, on March 1,with Curry on the bench, Green left Phillips Arena with 15 points, 9 assists, and 13 rebounds. Davis hasn’t shown that he can make others around him better, as well as lead them to the postseason.

James is a different case than the other two names. He is one of the most well-rounded players to ever touch an NBA court. He can rebound, defend, pass, and somewhat shoot. On the other hand, just based off the 2015-16 season, Green has bested Lebron in most of the major statistical categories. He averaged more assists per game, rebounds per game, steals per game, and blocks per game. James obviously has had a more successful career than Green, but presently Green has come out on top.

There are a ton of talented players in the NBA that are candidates to boast this title. Several players can make their case, but Green is the actual possessor of such an honor. While Green might have missed out on winning the DPOY and MVP Awards, at least he has the accolade of being the “NBA’s Best All-Around Player.”

I am an aspiring sports writer and I have been published on three different websites currently.
0

has just registered!
55 minutes ago