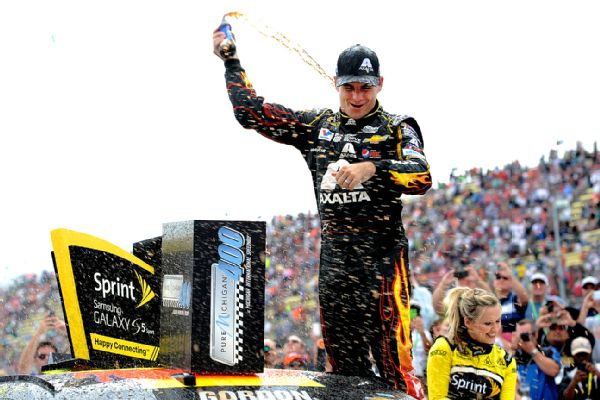 Jeff Gordon drove to his third victory so far this year at the Pure Michigan 400 at Michigan International Speedway Sunday.

Gordon also won at Kansas Speedway and Indianapolis Motor Speedway and is now in a four-way tie for the title lead with Jimmie Johnson, Brad Keselowski and Dale Earnhardt Jr.

The race began with Kyle Busch crashing himself into the wall on lap 4 prompting a very early caution. Joey Logano and Jeff Gordon were easily the class of the field leading the first and second most laps respectively.

Before Gordon was able to pull away too much, Logano had one last chance to get him. He wasn’t able to complete the pass and his car got loose underneath Gordon’s.

“We were battling on these restarts really hard and used basically every trick in the book that I had,” Logano said. I knew the 24 was also, he was laying back really hard. So every game that could be played was being played on the restarts.

I had a really good one the last one and I had a run and then I was clear I guess and I should have pulled down in front of him and gotten the draft from him. Instead he had enough momentum to get up to my quarter panel and pull me back and had position on me going into the corner and was able to carry that momentum into the lead.”

“Then I gave it one more final shot there and tried to get underneath him off of two there and almost had him and once again pulled me back.”

The final 28 laps of the race had three restarts. Logano had been able to take the lead into turn one on the first two, but not the third.

Only three races remain before the Chase for the Sprint Cup begins in September at Chicagoland Speedway. Drivers will be scrambling to win and secure a spot in the chase in the coming races, the next race will be at Bristol Motorspeedway.