Jimmie Johnson raced his way to another dominating performance at Dover.

Johnson led a race-high 272 of 400 laps and was never seriously challenged in winning for a second week in a row, and record ninth time in his career at the 1-mile track.

Johnson became Dover’s all-time leader in laps led Sunday, was never seriously challenged oncae he took the lead from Matt Kenseth around the halfway point of the race.

The field got one last shot at Jimmie Johnson on a restart with 34 laps to go, but Johnson got a huge jump on the rest of the competition and simply cruised to the checkered flag.

“It is incredible. I have so much to be thankful for: awesome race team, awesome car, awesome family. And look, we got Evie and Lydia into victory lane,” the driver of the No. 48 said as he celebrated with family.

“(Crew chief Chad Knaus) told me I’d love the car, and sure enough, he unloaded and he was right.”

“We were pretty equal to Jimmie there but never got a crack at him,” Keselowski said. “I would have liked a shot. It was a decent day for us finishing second, and that is something to be proud of, but we want one spot more.

“It looked like AJ was driving pretty hard like he always does,” Biffle said. “… When a guy makes a mistake like that, usually multiple cars are going to pay for.”

Kyle Busch seemed to have had the car capable of challenging Johnson, leading the first 81 laps. However Busch’s day ended, on Lap 125 when Bowyer pulled in front of him off of Turn 4, causing Busch to hit the wall.

Allmendinger was attempting to pass Stenhouse on the bottom of Turn 2, but clipped him instead. Allmendinger then moved up into Biffle and the two spun out.

As Biffle went into the outside wall, Stenhouse had nowhere to go and slammed into his teammate before sliding down the track and into the inside wall. 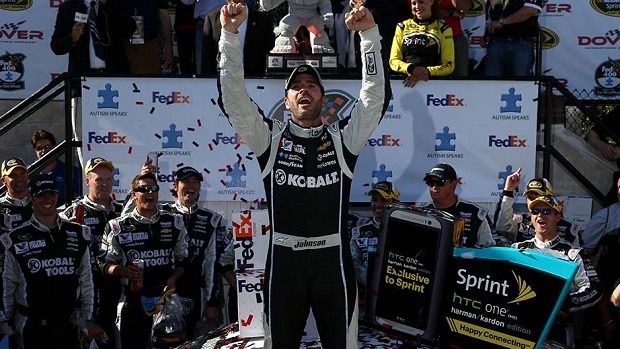