“I’ve gone through these battles before and come out stronger, and I’ll go through them again,” said Keselowski, sporting a cut on his cheek and a busted lip after being roughed up in a pit fracas that erupted after Jeff Gordon grabbed his fire suit and Kevin Harvick gave him a shove. “But what I’m not going to do is back down.

I’m not going to get in the spot where I was in 2013, where I tried to be exactly what they all wanted me to be, because what they want me to be is a loser, and I’m not here to lose. I’m here to win. That means I’m going to have to drive my car, harder, stronger, faster than everybody out there. That’s what I feel like I did today.

“Will those guys race me hard or harder than others? Absolutely, I’m certain they will. I can’t fault them for that. I’d rather have enemies in NASCAR than have friends and be sitting at home.”

Logano was seemingly set for another Top-5 finish when he suffered disaster during a pit stop under caution with just under 40 laps to go. As the No. 22 Penske crew put on a new set of tires, lugnuts on the right-rear tire fell off because of a glue issue.

That made for a slow stop and Logano tumbled all the way to 23rd. Then, shortly after the restart with 32 laps to go, Logano and Marcos Ambrose made contact down the backstretch.

Two laps later, Logano had his right-rear tire go down on him and he went spinning onto the apron between Turns 1 and 2 to cause a caution.

But when another yellow came out with 20 laps to go, Logano chose to stay out in a bid for track position and moved up to seventh.

Sunday’s race was the eighth of 10 in the Chase for the Sprint Cup, and both drivers are desperately scrambling for a next round slot.

Jimmie Johnson, who was eliminated in the last round of the Chase, won for a record fourth time at Texas Motor Speedway.

The next highest-finishing Chase contenders behind Harvick and Keselowski was Carl Edwards in ninth and Denny Hamlin 10th.

Texas was the second consecutive Chase race won by a driver already eliminated from title contention. That means at least three drivers will advance on points to get into the final four in the season finale at Homestead in two weeks.

The third round of the Chase wraps up next Sunday in Phoenix, where Harvick won eight months ago in the second race of the season. 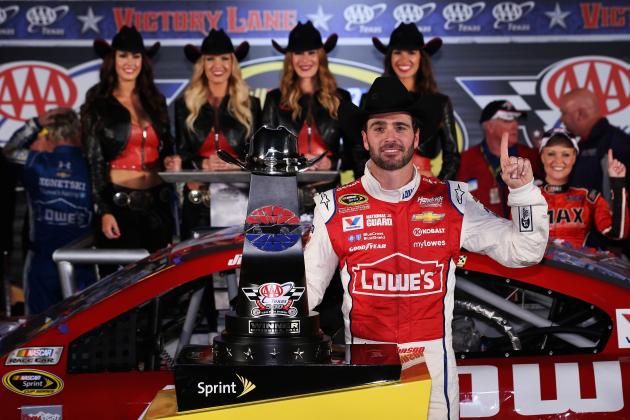