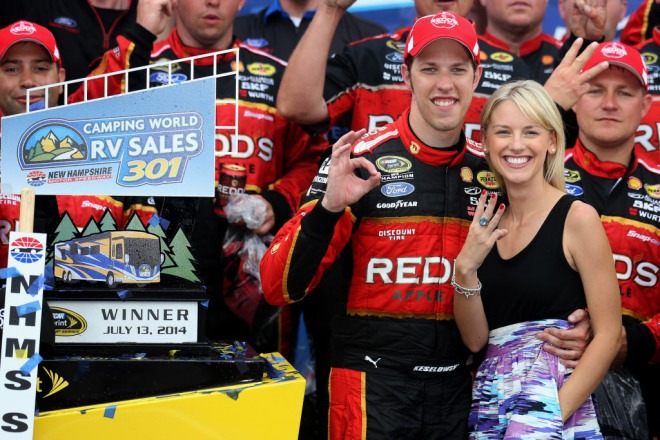 After the last caution came with four laps left, Keselowski pulled away on the final restart to become the first driver to sweep the weekend in track history. He had the fastest car most of the weekend, even leading the speed charts during both Sprint Cup practices on Saturday

Keselowski survived without a cut, splinter or pinch. He didn’t even fumble his winning lobster. For once, his victory celebration was as perfect as his performance on the track.

The 2012 Sprint Cup champion is now tied with Jimmie Johnson for the series lead in wins.

“This was just such a phenomenal weekend and these don’t happen that often,” he said.

He needed four stitches to close a wound he received during his Victory Lane celebration in the Sprint Cup race at Kentucky. He tried to open the bottle of champagne by hitting it against a podium, and the bottle broke and cut his hand.

Joey Logano was running inside the top five late in the race when he connected with Morgan Shepherd. The 72-year-old Shepherd, who extended his mark as the oldest driver to start a race in NASCAR’s Sprint Cup series, was about 15 laps down when his No. 33 slid up into Logano.

“I feel like there should be a driver’s test before you get out in a Cup car and make sure you know how to drive before you drive one,” Logano said.

Shepherd was 39th and completed 278 laps

Jimmie Johnson was knocked out of the race early after two rear left tire issues. The first time the tire was flat; the second time, the tire exploded and slammed the No. 48 Chevrolet into the fence. He finished 42nd.