With eight minutes on the clock left, Samuel Eto’o popped up for Everton with a goal; salvaging a point from a 1-1 draw in their Europa League Group H tie against Krasnodar.

Out of the two sides, it appeared that Krasnodar was the most comfortable in the first half, after Ari da Silva Ferreira put Krasnodar ahead on the 43rd minute but Eto’o dampened their hopes with a close range effort from a Leighton Baines cross; ensuring Martinez’s side remain top of Group H, unbeaten on 4 points.

Krasnodar are currently unbeaten at home so far this season winning 4 out of the possible 4 home games, and they used that to their advantage; making the better of starts when their Mauricio Pereyra fired over the bar in the opening first minute, before Izmailov flicked the ball just over the crossbar.

After his sublime performance in their game against Wolfsburg a fortnight ago, Everton stopper continued that performance; pulling off a great stop down low from a Izmailov drive; and also tipping Artur Jedrzejczyk’s shot around the post.

Despite the pressure being placed onto Everton, they settled into the game; beginning to become the more dominant side. Krasnodar’s keeper Andriy Dikan was put to the test as he kept out a blistering effort from Aiden McGeady and Gareth Barry.

Everton’s young centre-half John Stones came close from a corner, with his header going over.

The missed chances created by Everton were punished just two minutes before half time when a defence splitting ball made by Odil Ahmedov found Ari, with a little help by a inadvertent Jagielka flick on, converted his chance inside Everton’s box.

Krasnodar pressed on for a second after the break, though Ahmedov should have converted his great opportunity, instead of hitting Jagielka after impressive Tony Hibbert block an effort by Izmailov.

But it was Everton’s turn to try and create something; try and salvage something out of the game. And their hunt for an equaliser was over with eight minutes to go after Leighton Baines found Samuel Eto’o in the box to prod in to the net.

Overall, Everton appeared to be slightly outplayed by Krasnodar, however, they could have gone and won the game through a late winner, if it weren’t for Dikan to deny a low down header by Lukaku.

Here’s Everton boss Roberto Martinez and his view on the game:

“I am pleased because I thought Krasnodar played really, really well.

“We showed an incredible character to know to we had to wait a little bit and then be able to get ourselves back in the game.

“I think we finished the second half really, really strongly and I think the energy levels were in our favour at that point.

“It’s an incredible result for us to be able to get something from a very good side, who used their home advantage very well.

“I think anything you can get away from home is a positive.

“We were able to weather the storm in a couple of periods and then I felt we finished really strongly and could have won it at the end.

“I thought we couldn’t find our attacking rhythm in the first half. In the second half, Romelu (Lukaku, a half-time substitute) helped us. 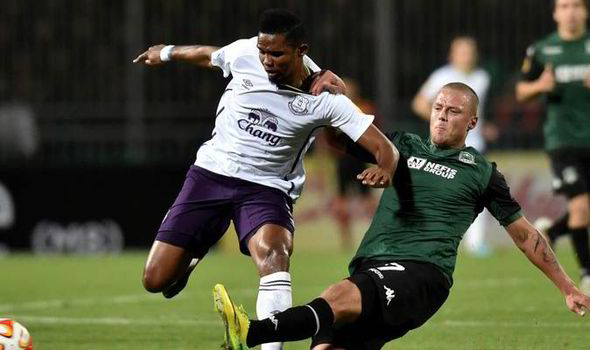