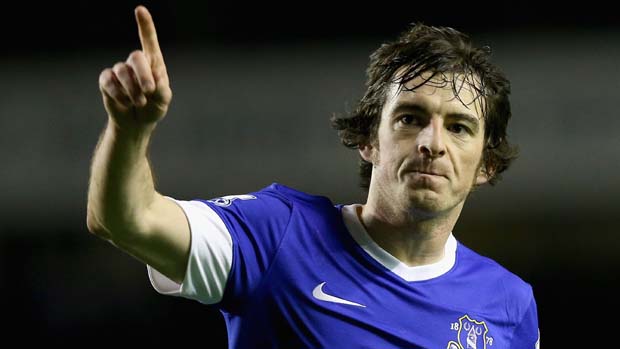 Everton and England left-back Leighton Baines is edging ever closer to securing a new contract with Everton after consistent and outstanding performances in his field. The 29 year old attacking full back has now obtained over 210 appearances with the Toffees; netting 19 Premier League goals since his move from Wigan Athletic back in 2007; for a fee rumoured to be around £5 million with an extra £1 million in add on fees.

The length of the contract extension is yet to be confirmed but his wages has thought to be worth around £75,000 per week. The board and manager Roberto Martinez is hoping that he remains in the top flight with Everton for the rest of his career.

The Toffees are currently on a break in Tenerife (Spain) after quite a busy yet successful first half to the season and Baines looks set to sign the new contract when they return on the weekend before Monday night’s game against West Bromwich Albion (8pm Kick-off).

After 7 years at the club, Leighton has earned 22 caps for his home nation England; netting his first and only goal to date for England back in September 2012, against Moldova in the 2014 World Cup qualifying campaign; scoring a deflected free kick to secure England’s 5-0 victory over the minnows of Moldova.

Former Everton manager and now Manchester United manager David Moyes, has failed twice in bidding for the left back, to join the Red Devils and re-unite the full back with his former manager. The bid also included Belgian midfielder Marouane Fellaini for a joint fee of the two players for £28 million. The bid was rejected by the Everton board and described strongly as “insulting and derisory.” Fellaini eventually went to Manchester United for a fee of £27.5 million.

And with Baines looking to sign a new contract in the coming days with the Toffees, the rumoured bid for the full-back seems to be obsolete.

In transfer news, Roberto Martinez has claimed interest in Stoke City striker Kenwyne Jones and Jones has rumoured, that he wants to make a transfer to Goodison Park, after the striker failed to arrive for Stoke City’s game against Liverpool. This could be a possibility as Nikica Jelavic looks almost set to join Steve Bruce’s Hull City and luring Jones to Everton would fill in the void of the Croatian international.

21 Years Old Senior IT Technician in the Education Sector Football is my religion, supporting my b...
0