Lewis Hamilton has won the 2014 Sports Personality of the Year beating Rory McIlory and Jo Pavey to the title. The McLaren F1 Driver was tipped to win the title and that was confirmed on Sunday night in front of a big crowd in Glasgow. The title caps off a brilliant year for Hamilton who won his second F1 title by beating Nico Rosberg in the final event of the year in Abu Dhabi.

Hamilton becomes the seventh F1 driver to win the title and the first since Jackie Stewart. When asked his successes, Hamiton thanked his family saying, “I could not have done this without my amazing team, my family, my dad who once had four jobs to help me, my brother. I’ve been incredibly inspired by them. I never thought in a million years I’d be surrounded by such people. Thank you to all the fans. I always say we win and lose together because I feel your love. I feel so proud to carry the Union flag and hope I will continue to make you proud.”

Hamilton had twice previously been runner-up for the title. In the other awards handed out over the night, golf was again at the centre of people’s thoughts as Paul McGinely won the Coach of The Year. Claudia Fragapane won young Sports Personality of The Year after becoming the first British woman in 84 years to win at least four gold medals in one Commonwealth Games. 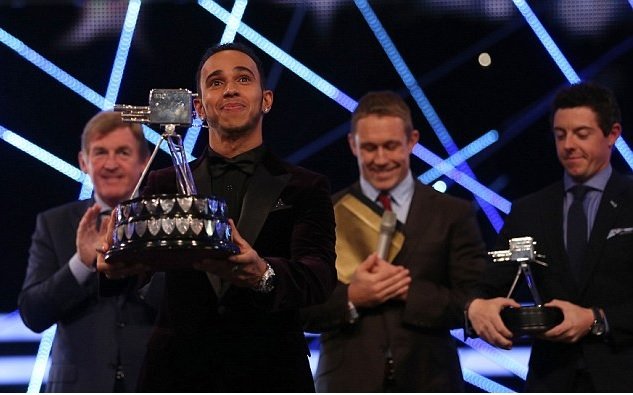