Reds skipper Steven Gerrard put his team in front on 65 minutes with a superb free-kick which seemed to give Liverpool their third win of the season. This third win will have to wait according to Everton captain Phil Jagielka as he rocketed a shot into Mignolet’s net in stoppage time.

Typical Merseyside derbies are always physical; challenges going in left, right and centre. Gareth Barry proved that with a grim start to the game; being booked within the first moments of the game after nearly giving away a penalty when the ball struck his arm and then taking out Mario Balotelli.

Liverpool appeared to be the more dominating side as Balotelli was denied by Everton stopper Tim Howard; as was Adam Lallana and Raheem Sterling. Everton seemed to lose their spark in recent weeks and the spark seems to have gone out for a period of time as Kevin Mirallas is now sidelined due to a hamstring problem.

As the first half seemed to predict a draw brewing; the second half sprung into life on the 65 minute mark. Mario Balotelli was brought down just outside Everton’s box. Gerrard converted with an excellent free-kick; looping over the Everton wall and past Tim Howard.

Everton acted quickly, with Lukaku having a chance to level the scoring, but his chance was squandered when his glancing header was smothered by Mignolet.

Liverpool looked set to be on their way to victory in comfortable fashion, until Phil Jagielka, out of nowhere hit a first time volley; swerving away from Mignolet, and fired into the top corner.

Referee for the derby Martin Atkinson had a tough job on his hands; potentially could have given away two penalties in the first half.

This 221st Merseyside Derby appeared to be a special one for two Everton players. Veteran Tony Hibbert slotted in at right back yesterday afternoon to replace Seamus Coleman who has a head injury. This was Hibbert’s first start in two seasons. Also, Everton youngster Tyias Browning made his first senior debut for the Toffees, coming on as a substitute to replace Tony Hibbert.

“We had two choices; accept it wasn’t our day or keep fighting.

“We showed incredible belief and character and we got our rewards.

“We had to show a great defensive intensity and we did that, though we weren’t ourselves going forward.

“As a result, I’d say it’s our best of the season so far because of what it could give us. It could lift us and change the dynamic of our season.”

Everton lost Mirallas due to injury in the first half and the Belgian’s hamstring will now be checked out after he had to be carried off on a stretcher.

Mirallas has been a key player for the club this season but Martinez fears he could be facing a spell on the sidelines.

He added: “It seems bad. It’s a hamstring. We’re going to assess him in the next 24 hours.

“Kevin has been in great form and we’ve got a lot of games coming up. It’s very unfortunate for us.” 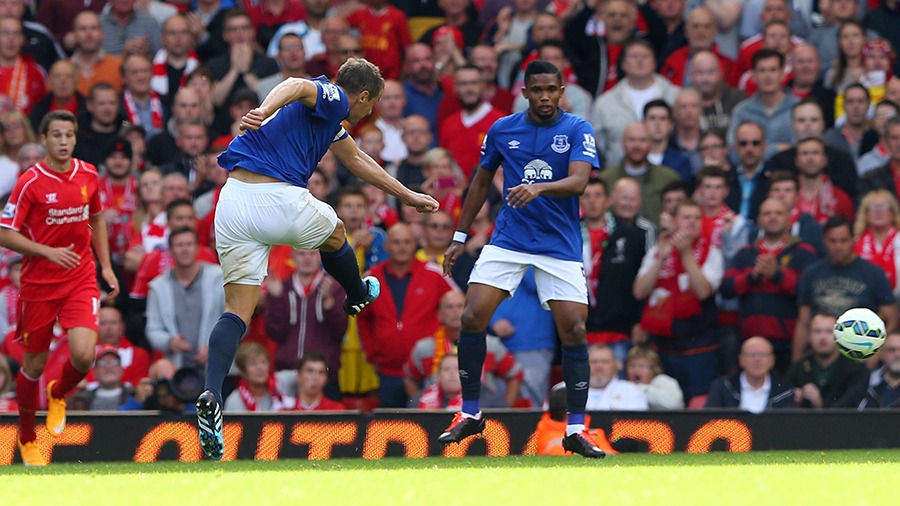