Liverpool secured their first group stage victory of this season’s Champions League after a late penalty sunk a brave Ludogorets team 2-1 at Anfield.

Mario Balotelli put the Reds ahead in the 81st minute before Dani Abalo levelled the scores on the 90th minute, but there was heartbreak for Ludogorets as Steven Gerrard netted a stoppage time penalty to secure victory for Brendan Rodgers’ men.

This was Liverpool’s first game in the Champions League since their 2009 group stage campaign where they only managed five goals in six games and were dumped out of the tournament following the 2-1 home defeat to Fiorentina.

Meanwhile, their counterparts Ludogorets, were appearing in the tournament for the first time in the club’s history after a dramatic 6-5 penalty shoot-out victory over Steaua Bucharest.

Defender Cosmin Moti became a hero after he saved two penalties following the sending off of goalkeeper Vladislav Stoyanov in the final minute of extra time.

Liverpool, who were looking to bounce back from their shock 1-0 home defeat to Aston Villa at the weekend, started off brightly but it took 20 minutes for them to carve out their first opportunity of the match. From a Ludogorets corner, Liverpool ran straight down the pitch and after running his way into the box, Raheem Sterling’s shot was easily saved by goalkeeper Milan Borjan.

The Canadian international goalkeeper was in action soon after when Balotelli muscled his way past his marker before seeing his driven shot pushed away. Adam Lallana collected the rebound only to see his effort  again well saved by the Canadian keeper.

Ludogorets continued to frustrate Liverpool and in the 33rd minute Borjan was again involved, only this time easily saving a tame Balotelli shot from the edge of the box after he ducked and dived his way past several Ludogorets defenders.

At half-time the score remained 0-0 with Liverpool looking flustered at their inability to break down a stubborn Ludogorets defence, meanwhile the Bulgarian side offered little to nothing in terms of chances but looked deadly on the counter attack with the pace of Mihail Alexsandrov and Virgil Misidjan.

Liverpool started the second half exactly how they started the first and this time the wait for a chance wasn’t long. Phillipe Coutinho, who had a first half to forget, carved out the half’s first opportunity with a long-range effort that was comfortably saved by Borjan a minute after the restart.

The Reds continued to pile on the pressure but that first goal seemed to be non-forthcoming especially when Javi Manquillo volleyed over from close range in front of the Kop.

Ludogorets continued to frustrate Liverpool and looked like they could catch Brendan Rodgers’ men off guard and from a throw in they nearly did just that. From Marcelinho’s quick throw in, Roman Bezjak fired just over from 20-yards out.

Liverpool almost relieved tensions in the 69th minute when Manquillo’s cross was met by the head of substitute Fabio Borini but his effort was well tipped over the bar by Borjan.

However, the Bulgarian side should have taken a shock lead a few minutes later when Marcelinho played a glorious throughball to Bezjak whose effort struck the woodwork, but Bezjak would be disappointed to have not hit the back of the net from such an amazing chance.

After that crucial chance, Ludogorets paid the price and the deadlock was finally broken in the 81st minute when Balotelli poked home from Alberto Moreno’s cross in front of the Kop sending Anfield into ecstasy.

However, the Bulgarian side didn’t give up and in the 90th minute, Dani Abalo rounded keeper Simon Mignolet to slot home the equaliser.

Ludogorets looked to have claimed an all important point but straight from kick-off Liverpool earned themselves a penalty when Manquillo was bought down in the penalty area by Borjan. Gerrard stepped up and calmly slotted home to put his side back in front, heart-break for Ludogorets and especially Borjan who made a horrific error to concede a late penalty when it looked a draw was certain.

The game finished 2-1 and Liverpool should consider themselves lucky to have beaten a brave Ludogorets side who showed they are to be wary of on the counter attack, meanwhile the Reds will be looking to improve on taking their chances as it took over 80 minutes to break the deadlock 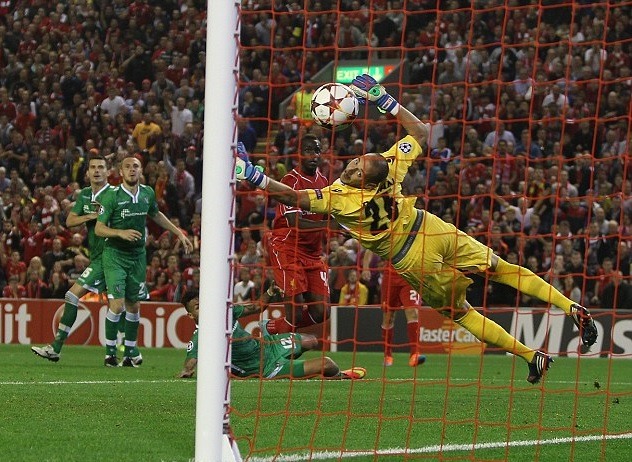