Liverpool have now stretched their lead at the summit by five points but were made to fight by relegation threatened Norwich.

Raheem Sterling opened the scoring for Liverpool early in the fourth minute with a thumping long range shot. Luis Suarez then scored a second on eleven minutes.

Norwich striker Gary Hooper pulled one back after an error by keeper Simon Mignolet.

A fight back was dampened when Sterling scored his second with a deflected shot, before Robert Snodgrass scored a header to pressure Liverpool to the end.

This was the eleventh successive for Liverpool and ensures Brendan Rogers men will be playing Champions League football next season.

For Norwich it was a sixth defeat in eight matches but they can take heart from a spirited performance. They remain two points above the relegation zone.

For Chelsea it was once again a match where their striking inadequacies were severely highlighted converting only once chance from thirty one shots not helped by the absence of the injured Eden Hazard.

Chelsea opened the scoring when Samuel Eto’o jumped on some poor defending from a corner put the ball in the Sunderland net from close range.

Sunderland managed an equaliser six minutes later also from a corner. The ball landing at Alonso’s feet, he produced a low drive which Chelsea keeper Schwarzer could only parry. Connor Wickham reacted quicker than John Terry to score his third goal in a week.

Chelsea midfielder Ramires found himself lucky not to be sent off after becoming aggrieved by a Sebastien Larsson challenge and retaliating with an elbow in full view of the referee.

Chelsea continued to pour forward throughout the match but their over commitment left them vulnerable which was exposed as left back Azpilicueta slipped allowing Jozy Altidore through. The left back slid to challenge but instead brought his man down to concede a penalty.

Liverpool loanee Fabio Borini kept his cool to slot past Mark Schwarzer and leave Sunderland fans dreaming of a miracle.

In a rehearsal for the FA cup final, Arsenal put three past Hull to keep their challenge for fourth place moving.

Arsenal took control after an impressive Aaron Ramsey fired in a well worked goal. Ramsey then set up Podolski to fire a hard volley into the bottom corner just before half time.

Ramsey was involved in the third after the break shooting at goal only for Hull keeper Steve Harper to parry straight to Podolski who scored his fifth in as many games.

David Moyes enjoyed a miserable return to Goodison Park as his Manchester United team were well beaten by Everton.

United had plenty of possession but were unable to capitalise in anyway where as Everton were a constant threat throughout.

Leighton Baines opened the scoring from the sport after Phil Jones handled deliberately in the area. The outstanding Seamus Coleman caused United problems all game and his pass led to Kevin Mirallas to get behind the United defence and put the ball past David de Gea for Everton’s second.

Fulham are still fearing relegation after a 3-1 loss to Tottenham at White Hart Lane.

Spurs went ahead after Paulinho tapped in a fizzing Christian Eriksen free kick. An Ezekiel Fryers error then led to Steve Sidwell steering in a leveller.

Harry Kane then glanced in a header from an Aaron Lennon cross to restore the advantage. Another fast paced free kick from Eriksen wasn’t dealt with and Younes Kaboul bundled into the net.

Fulham had the chance to score from the spot after a hand ball but Sidwell was denied by a good save form Spurs keeper Hugo Lloris.

Cardiff City claimed a vital point in their fight to stay up as they fought back against Stoke.

Marko Arnautovic opened the scoring after a controversial foul on Peter Odemwingie led to a penalty being given.

Peter Whittingham then levelled from the spot for Cardiff after Nzonzi tripped Frazier Campbell. Cardiff had a goal disallowed after Juan Cala headed in before Jon Walters struck the bar for Stoke.

Newcastle had previously lost their last four and appeared short in confidence but still managed take the lead via a finish form Shola Ameobi, but a Ben Davies corner found the head of Wilfried Bony to level before half time.

The match was even until Cheick Tiote felled Marvin Emnes and Bony showed a cool head to score from the spot.

Newcastle fans showed their displeasure after the whistle, they have now suffered five straight defeats and their ninth in twelve matches.

Crystal Palace secured their Premier League survival and a record fifth win in a row in a top flight division as they saw off West Ham at the Boleyn Ground.

The Eagles had an early penalty appeal turned down after a shot hit Kevin Nolan’s shoulder. Then they almost fell behind from an Andy Carroll header.

Captain Mile Jedinak confidently stepped up to convert the penalty and ensure the three points for Palace who are now up too eleventh.

Aston Villa ended a dismal week with a good point against Southampton and edging closer to survival.

Southampton dominated the match but were unable to score, Steven Davis having the best chance but keeper Brad Guzan keeping his shot out.

Villa held on for 0-0 and now are five points above the drop zone with four games left. 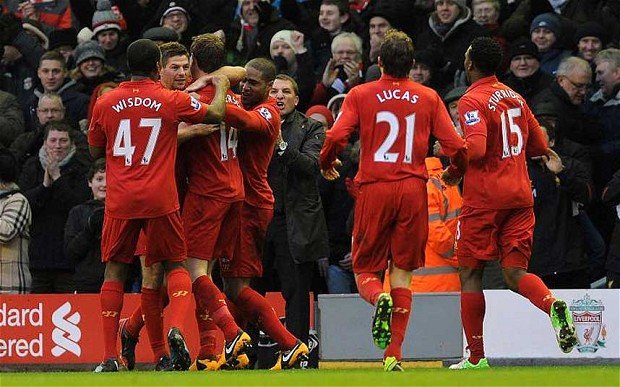