The French international has made four appearances in all competitions for the Premier League giants this season and in total he has made over 33 appearances for the club during which he has found the back of the net 3 times.

While the 23-year-old season has been plagued with a serious injury Didier Deschamp points out that a player without evident quality does not get to be a starter for a team like Liverpool who have had successful campaigns in domestic competitions as well as in European competitions in recent times.

“You’re not a starter at that age in a Liverpool team which were European champions by accident.” French National team coach Didier Deschamp

France will take on Austria on November 22nd, Denmark on November 26th and Tunisia on November 30th for the group stage matches. The former World Cup champions will look to fire all cylinders and lift the world cup yet again.

Liverpool is through to the next round of the EFL cup as they managed to beat Derby County 3-2 on penalties. Jurgen Klopp’s men dominated the match as they had the most shot on target (6) and possession (74%) however they failed to break the deadlock till the end of the game hence they had to rely on winning the penalty shootout to knock Derby out of the competition.

Despite a goalless match, Jurgen Klopp was pleased with his team’s performance and he shared his thoughts on the game. (via liverpool.com)

“Liked it, I liked it again. It is the most difficult thing in football if you are put in a team together and you face an opponent who is deep defending, [has] a lot of legs, counter-attacking, long ball, set-pieces, all these kind of things. We obviously didn’t have a lot of time to prepare the game but we could at least train once because with this team, that’s why we changed”.

“That’s what I said last year – people always don’t like it when you get knocked out and it’s like, ‘[The team was] Very young, you don’t take the competition serious.’ Was never true but we have to do two things: make sure we don’t risk anybody, that’s very important, and the other thing is that we really love to give the boys the opportunity.”

“So you can now imagine, even if we lose the game tonight in a penalty shootout, if the people wouldn’t have seen Stefan, Bobby, Ben, Mel, Layton, Fabio is only a little bit older, if at all, Calvin of course, and then Harvey comes on. So, there were eight or nine really young boys and it’s so nice to see them, that you can give them the opportunity to play real man’s football against a team who wanted to get through obviously.”

Before club football draws to a close for the FIFA World Cup Liverpool will take on Southampton on the 12th of November which they will have to win in order to move up the table and establish themselves as a potential title contender. 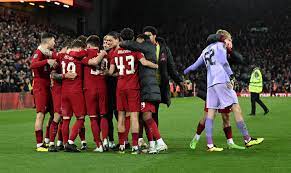