In 2022 Football fans have seen a brilliant year of Football from an unprecedented World Cup that culminated in one of the greatest world cup finals ever and saw football great Lionel Messi lift his first world cup in possibly his last appearance for Argentina. To new Man City star Erling Haaland breaking goal scoring records and striking fear into every premier league defender’s heart. Wolves vs Man Utd was the first of the New Years Eve games and an interesting game it was.

The first notable factor was the absence of Man Utd star Marcus Rashford who was dropped for disciplinary reasons with the start instead being given to Man Utd wonderkid Alejandro Garnacho. The game also saw a second start at Centre Back for Luke Shaw. The game started slowly with both teams not wanting to give away too much however this was nearly undone in the 5th minute when a Casemiro header that was heading on target was deflected behind. Man Utd looked more comfortable at the beginning of the game playing the ball confidently with Midfielder Casemiro managing to break through Wolves’ midfield and create chances through the wings for Garnacho and Antony. Man Utd was gifted a massive chance in the 16th minute when a back pass from Nelson Semedo fell way short of keeper Jose Sa the pass was latched onto by Garnacho however it was well saved by Sa.

Man Utd continued to pile on the pressure with a beautiful interception by Nat Collins managing to intercept a potential goal-scoring opportunity for Anthony Martial in the 29th minute.

Changes were made at the beginning of the second half from both sides with Wolves bringing on Adama Traore for Diego Costa and Man Utd bringing on Marcus Rashford for Alejandro Garnacho. Both teams competed well with each other however no real chances were created. This nearly all changed in the 59th minute when a sensational free-kick from Ruben Neves was even more sensationally saved by David De Gea in what was Wolves’ best chance of the game so far. The game was back and forth with a goal looking possible for either team. A goal eventually came in the 75th minute from substitute Marcus Rashford who burst past the Wolves defenders and smashed the ball past Jose Sa and into the back of the net giving Man Utd the lead and Rashford his 6th Premier League goal of the season. This goal proved to be the only goal of the game with Wolves coming close when a Raul Jimenez header was saved once again by David Gea however Wolves’ lack of a real goal scorer proved to be their ultimate downfall.

With this win Man Utd jumped up to 4th position knocking Spurs down to 5th with an important display from De Gea getting a win against a tough and resilient Wolves side. Another clean sheet from David De Gea saw him move up to second position on Man Utd’s All-time clean sheets leapfrogging Alex Stepney with 176 clean sheets. De Gea now only sits behind Man Utd great Peter Schmeichel who has 180 clean sheets. Overall Marcus Rashford proved to be the difference with Man Utd heading into the new year in 4th position and picking up their 5th Premier League win in a row.

ALSO READ:  Tottenham is looking to lure Barcelona star away from Camp Nou 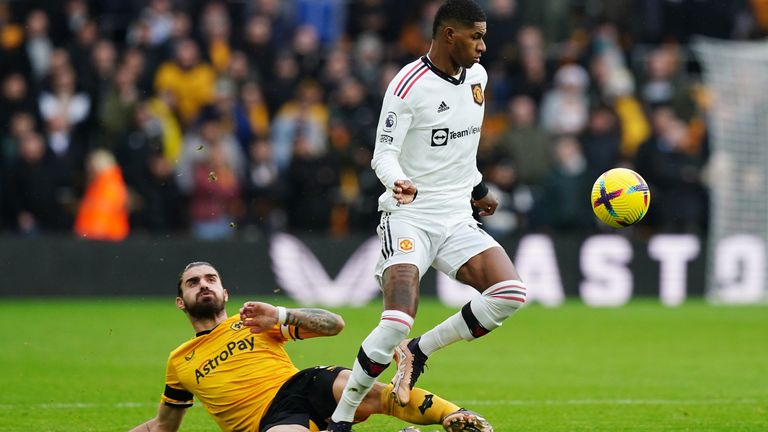