The stage was set at Old Trafford for another classic European night. Red and white cards spelled out United across the Sir Alex Ferguson stand, and the atmosphere was electric.

The line ups were:

It was United who had the first real action, when Danny Welbeck had a goal disallowed for a high foot, after he flicked the ball past Martinez’ slightly lowered head and shot past Neuer. A good finish from Welbeck and on another day he might have seen the goal stand.

Bayern then started a period of dominant possession, with Robben and Ribery combining to almost find Muller with a cut back. They continued to probe, with the full backs and wingers overlapping nicely. United could only scramble the ball away, and struggled to gain any foothold.

Valencia picked up a booking on 14mins for late tackle on Lahm. Bayern continued with the fluid football, and on the half hour Arjen Robben cut inside on his left foot and unleashed a curling effort that forced De Gea to make a save at full stretch.

United then had their best moment of the game so far when the ineffectual Marouane Fellaini broke into space on the right before playing the ball into the path of the on rushing Rooney, whose shot was blocked down quickly by Lahm.

Then on 39th minute the chance of the game so far. Rooney slipped a ball through for Welbeck, which should have been cut out by Boateng, who slipped and suddenly Welbeck was through one on one with the keeper.

Possibly with too much time to think he went for a chip over Neuer instead of an orthodox shot, and Neuer was able to claw away easily much to the groans of the expectant crowd.

Just before the half Antonio Valencia had a cross shot deflected for a corner.

Half time saw Shinji Kagawa replace Ryan Giggs who had a quiet fire half.

Bayern didn’t start as slick as in the first half, and it as the home side who drew first blood. In the 57th minute a Wayne Rooney corner was guided into the corner of the net beautifully by Nemanja Vidic. 1-0 much to the delight of the home fans.

Schweinsteiger then picked up his first yellow card of the evening for a tackle on Michael Carriick. A minute later and a rattled Bayern made a change by bringing on Mario Mandzukic for Thomas Muller.

Bayern didn’t take long to regroup and hit back. Schweinsteiger again involved in the action. A cross from Rafinha was headed back across goal by substitute Mandzukic into the path of schweinsteiger who lashed he ball high into the net for the equaliser and the precious away goal.

Valencia was lucky to stay on the pitch after a dangerous lunge on Boateng that should have brought his second yellow card. Alexander Buttner picked up a knock and with no defenders to replace him, it was left to Ashley young to plug the gap.

Bayern begin to turn the screw with Robben dragging a shot wide and Ribery cutting a dangerous ball across goal that Mandzukic wasn’t alive too.

Welbeck was replaced by Hernandez with 5 minutes to go, and he drew a foul from Martinez who picked up a yellow card that will keep him out of the second leg.

Then with the clock running down, Schweinsteiger brought down Wayne Rooney on the edge of the United box. This was his second yellow and he now misses the second leg.

The match ends with United very much still in the tie.  Bayern were not able to sustain their early dominance, and United certainly had their chances to come out on top.

Bayern were the better team and will still be confident of progressing, but with United giving them plenty to think about and the suspension of Schweinsteiger, the Germans will be slightly more wary than before the match began. 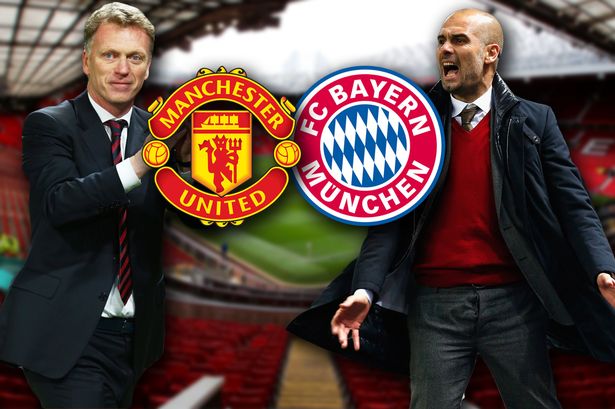