On Halloween night the rugby league European cup will be decided in the Scottish border town of Galashiels. Scotland go into the game in pole position, having beaten Ireland in Dublin last week, and Wales the week before.

France sit second in the table, having been on the receiving end of a huge upset against Ireland in week 1.

If Scotland can avoid defeat they will qualify for a coveted place in the 2016 Four Nations, where they will face off against likes of the Australian Kangaroos. Qualification would represent a boon for Scottish rugby league.

The Four Nations would provide an opportunity to publicize the game in a nation that has only been playing rugby league for 20 years.

In contrast, missing out on the Four Nations would be another blow to French rugby league. Les Chanticleers missed the 2011 edition after losing the qualifier to Wales. Recently the French were forced to cancel a 2015 tour of New Zealand.

The Kiwis bypassed the French to set up a series against England. With several first team regulars missing from tonight’s match – including players such as Remi Casty and Olivier Elima – France are in danger of missing another opportunity to take on the world’s best rugby league sides.

Netherdale stadium in the Scottish border region, where Scotland take on France

Despite the grand prize on offer, the tournament has suffered from a lack of awareness. It has not been televised, not even by Premier Sports, who aired last years World Cup. The FFR XIII, the governing body of French rugby league, made an effort to stream last weeks match against Wales. You can also watch entire matches on YouTube after the game.

Yet the lack of live coverage is a serious concern. The 2013 Rugby league World Cup demonstrated that matches between “minnow” nations such as Scotland and France are just as entertaining as any Super League game. We have the product, but for international rugby league to grow games such as Scotland vs France must be televised. 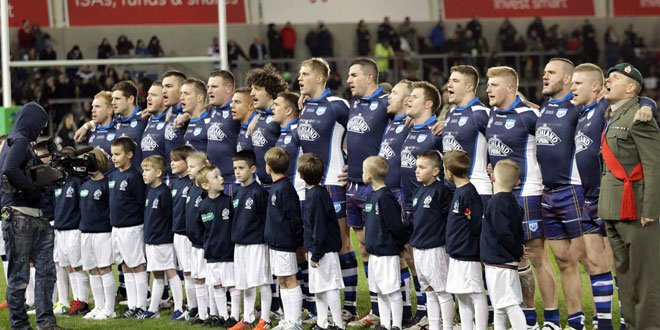