According to Michael Schumacher’s manager Sabine Kehm, the former F1 driver has been showing signs up encouragement displaying moments of ‘consciousness and awakening’.

Schumacher suffered a horrendous fall causing a severe head injury while skiing in the French Alps three months ago, since then the German has been in a medically induced coma at Grenoble Hospital.

The staff at the hospital has been gradually trying to awake Schumacher; this news comes as the most positive yet.

Investigators probing the accident said Schumacher had been going at the speed of “a very good skier” at the time of his crash in the resort of Meribel.

He had been skiing off-piste when he fell and hit a rock, investigators said.

Only last week it was reported that the family were planning to move former Ferrari driver from Grenoble Hospital, but his manager denied that was the case.

Michael Schumacher manager Sabine Kehm said: ‘We are on his side during his long and difficult fight, together with the team of the hospital in Grenoble, and we keep remaining confident.

‘We would like to thank you all for the continuous sympathies. At the same time we again ask for understanding that we do not intend to disclose details. This is necessary to protect the privacy of Michael and his family, and to enable the medical team to work in full calmness.’ 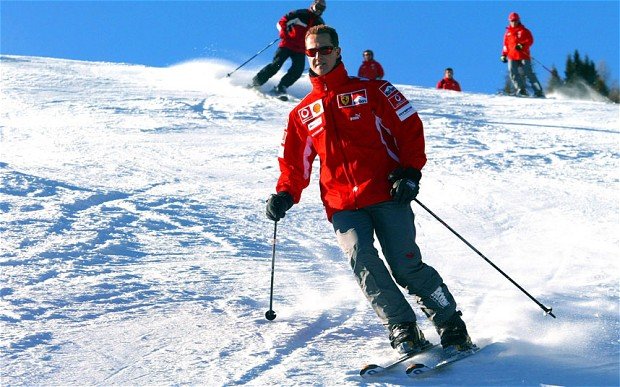