The NBA is getting good–really good. So good, in fact, that ESPN’s Mark Stein & Co. had a hard time picking a #1 team…they couldn’t decide between the Grizzlies and the Warriors based on just how hot both of the teams have been lately.

And I don’t blame them.

Steph Curry of Golden State has the Warriors in position to make a serious run in the playoffs as a top seed, if not THE top seed, in the Western Conference. Currently at 14-2 and on a nine-game winning streak, the Warriors are red-hot entering December. Set to face the testy New Orleans Pelicans, Chicago Bulls, and Houston Rockets right off the bat, the NBA audience will know shortly how for real the boys from the Bay Area really are.

Other teams will strut their true stuff this month as well, so expect nothing short of epic competition with potential playoff berth and energy being put into each contest. Here’s how insider Keith Rivas views the 30 teams so far:

First year coach Steve Kerr is showing all the haters that putting a championship team together involves a coach.

They may not have had as hot a start as other teams like Memphis and Golden State, but Damien Lillard has shown miles of improvement on his independent as well as team game.

3. Memphis Grizzlies (15-2)
Also a team that made a shocking coaching shift recently, the Grizzlies, like the Warriors, are showing that it can truly pay great dividends almost immediately.

4. Dallas Mavericks (13-5)
Dirk has gotten the most rest this season that he’s ever gotten while playing down in Dallas. This will be a big factor come post-season.

5. San Antonio Spurs (12-4)
After a slower start than normal, the defending champs are turning the page on their season and getting back to high-caliber form.

6. Toronto Raptors (13-4)
DeMar DeRozan will be missed dearly, but Toronto still has Drake…and the lead in the weak Eastern Conference. They’ll be alright.

Dwight Howard & James Harden are happy campers now that the problem, whatever it was, seems to be missing from Houston.

9. Washington Wizards (10-5)
Bradley Beal is back while Nene is out. Guess which ones the Wiz missed more?
Short Answer: Beal.

No LeBron? No problem. D-Wade and the Dinosaur (Chris Bosh) haven’t seen much chaos just yet. December may change that.

11. Milwaukee Bucks (10-8)
If Jason Kidd finds a way to will the Bucks and rookie Jabari Parker to the post-season after things got testy with Kidd’s stay in Brooklyn with the Nets, he deserves Coach of the Year. Hands down, no questions asked. There’s a lot to love about Milwaukee.

12. Atlanta Hawks (9-6)
Putting a brutal whooping of the Charlotte Hornets has the Hawks of ATL now on everybody’s radar.

13. Cleveland Cavaliers (8-7)
ESPN had the Cavs in the top ten…I’m shocked I have them on the positive side of my top-15. Haven’t seen a lot of positives yet in Cleveland, but maybe something special is starting to boil over. More production from the likes of K-Love and LBJ are necessary for stars like Kyrie Irving & Co. to start shining.

14. Chicago Bulls (11-6)
Even with the sold start, Chicago is going to need Derrick Rose to start playing in more games without having to fear severe injury coming back and haunting their young star’s career and impact with the team.

15. Phoenix Suns (10-8)
The Suns aren’t great, but they’re not terrible. It’s barely enough to be relevant, even this early in the season, over in the Western Conference so what Phoenix has for the rest of the year will be exciting.

16. Sacramento Kings (9-8)
On a three game skid, the Kings will try to straighten things out against the Raptors at home in Sacramento tonight @ 7pm PT.

In the Eastern Conference, the Nuggets would easily be at least a six-seed. On the West? Off the map, yes, but only two games back of the Suns for the last playoff berth.

18. Indiana Pacers (7-10)
As expected, after losing Lance Stephenson to the Hornets and Paul George to a gruesome leg injury, expectations were not high in Indiana. Pacers fans should hold strong though, because in the East there is always hope.

19. New Orleans Pelicans (7-8)
With no good sidekicks around, it is all up to Anthony Davis in the Big Easy.

20. Oklahoma City Thunder (5-12)
OKC has not done well at all without Westbrook or Durant, but that is about to change and there is going to be a bum rush in OKC for the playoffs and the Thunder might just make it…just maybe.

21. Orlando Magic (7-12)
With a much improved road team, the Magic just need to make a few adjustments in their own building for a roller-coaster ride that just might be somewhere along the lines of magically delicious.

22. Boston Celtics (4-10)
They’ve played well against big teams like Cleveland and Chicago, just haven’t been able to capitalize. If they can start playing better in just the fourth quarter while keeping their rhythm and tempo the first three quarters Boston will surely be in business.

Brooklyn is looking seriously foolish for dishing Jason Kidd the way they did.

24. Minnesota T’Wolves (4-11)
If the Timberwolves some how lose to the 76ers in their game coming soon all heck is going to break lose up north.

25. Utah Jazz (5-12)
Gordon Hayward is starting to look like the go-to man in Utah…Trey Burke’s assistance would be greatly appreciated, I am sure.

26. Detroit Pistons (3-14)
Andre Drummond has had a couple of key games lately. Once he gets on a roll and in a flow, expect the Pistons to be dark horses in the East.

27. New York Knicks (4-14)
Overwhelming expectations have taken a big bite out of Carmelo & Co. in the Big Apple.

28. Los Angeles Lakers (4-13)
Kobe set another record in the category of assists. Anybody even notice?

29. Charlotte Hornets (4-14)
Lance Stephenson and Michael Jordon are going to probably have to have a complete overhaul in Charlotte for success to come quickly. If not, expect more of the same…and a lot of L’s. 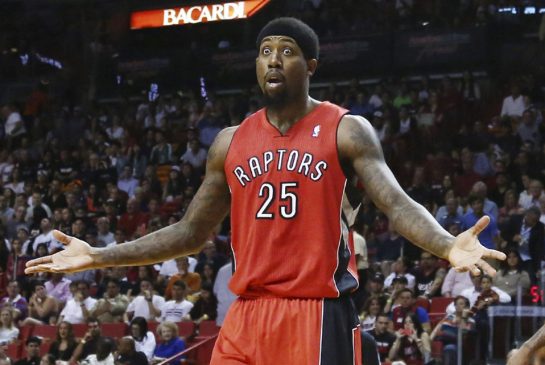