New Zealand Kiwis stole victory in the final minutes to secure their Four Nations finals date with a  14 – 12 win over Toa Samoa in a Herculean bout this afternoon at Toll Stadium, Whangarei.

After facing off with the traditional pre-match war dances, the Samoan Siva Toa and the New Zealand Haka, the two teams traded heavy blows early.

Quick hands down New Zealand’s right side had Jason Nightingale charging for the line, but Tim Simona brought him down.

Tautau Moga snatched a sloppy pass from Pita Hiku and sprinted 80 meters to score for Samoa, though Tim Lafai was unable to convert.

Shortly after down the other end, Kieran Foran caught a sneaky pass from Shaun Johnson and darted his way to the line.

Samoa coughed up a try, but were undeterred, as Ben Roberts produced a brilliantly deft grubber collected by Daniel Vidot to score in the corner, with Lafai again unable to capitalise with the conversion.

Tempers flared at times and Joseph Leilua found himself face to face with a grinning Manu Vatuvei.

Both players were exceptional in their nation’s colours, imitating front rowers by hammering the defence, mainly each other.

Vatuvai was denied a try due to obstruction, and New Zealand finished the half trailing 8-6.

Buoyed by their lead, Samoa came out of the sheds after half-time with a purpose, pinning the Kiwis inside their 20 then scoring though Leilua in the corner, who fended off opponents as if they were small children.

Dominating physically as well as through completions and possession, Samoa were still only up 12 – 6 over a home team who had just dismantled the Australian Kangaroo’s last week, and as ill-discipline and fatigue began to creep into the Samoan side, New Zealand sensed their chance.

The Kiwis smashed their way up the field then unleashed a string of passes and offloads, culminating in Nightingale touching down in the corner.

Unable to convert from out wide, Johnson was nonetheless wreaking havoc with his kicking, passing and running game, but the clock was ticking.

With five minutes to go, the New Zealand half-back produced a diamond play by sprinting across the field, shaking off Peter Godinet then offloading out the back, where the ball eventually found Shaun Kenny-Dowall slamming it down over the try line. 14 – 12.

A line drop out cut down Toa Samoa’s time for a final resurgence, and while the never-say-die Leilua intercepted a pass and took off down the paddock, his pass was deemed to have gone forward.

Despite the disappointment from the loss, Samoa came away from the match emboldened by their passion and commitment, being able to match it with a heavy weight like New Zealand, and will look to take the fight the Australians next week.

And while assured a spot in Wellington on November 15th, New Zealand will not be given a respite next week, as they face an English side next hell-bent on World Cup Semi-final revenge. 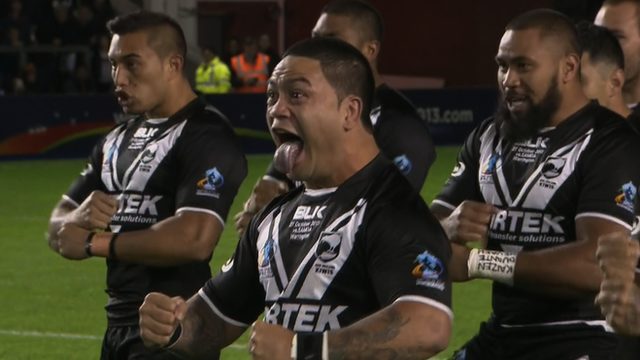