So how concerned should the ‘Big Blue’ fans be this year heading towards the 2014-15 NFL regular season opener in Detroit on Monday, September 8th for the Giants?

After a lackluster second pre-season outing, Giants’ QB Eli Manning was quoted as saying, “We have never been a strong pre-season team, so I am not really that concerned.” An easy response to avoid the obvious!

You do not have to be a New York Giant fan to understand that the Giant offense cannot move the ball so far. Eli was 1 of 7 and 1 of 9 in the first two pre-season appearances of the year. It does not take a NASA scientist to diagnose that 2 of 16, as a % success rate, can kill people in space. It can also kill you when your receivers aren’t getting into space and the Giant offensive line isn’t doing anything to help Eli have any success.

For the fourth time in four years, Eli has a new Offensive Coordinator, Ben McAdoo, who is trying to implement the West Coast offense with a QB coming off one of his worst season’s he has had professionally. Everyone knows about the MVPs and the 2 Super Bowls, but none of those factors in to how the Giants will have success after being down last year because for most of, if not all of, the Giant offense.

Let’s break down the first half of the pre-season Jets / Giants rivalry. Some of the biggest injuries on both sides has come out of this rivalry: Jason Sehorn going down for the year in the 1998 meeting; Chad Pennington being lost for the season in the 2003 meeting, and Mark Sanchez getting knocked out for his entire 2013-14 campaign before it even got started.

Osi Umenyiora tore his meniscus in the 2008 meeting, Eli cracked his head open with blood pouring down his face in the 2010 meeting, Mathias Kianuka tore his groin in 2011 and Ahmad Bradshaw’s hand problems started from an injury in the 2012 meeting. So there has not been lack of a big injury in essentially a meaningless pre-season game. And, as you will see, this game was no different.

The Giants had six possessions in the 1st half, all with Eli at the helm and that was the end of his night. So let’s break down all these possessions and note the concerns about a struggling Giants’ offense.

1st Drive of the game:

Eli called a play action fake and threw up a 50/50 floating duck that could have easily been intercepted, and almost was.

He completed his first pass of the game to #80, the Dancing Cruz, but that was the only completion of the opening drive. Jennings had a couple of decent runs out of the back field, but they only gained 25 overall yards and had to punt the ball away.

2nd Drive of the game:

It really should have been a ‘3 and out’ for the Giants offense, but the Jets defense bailed them out with a defensive holding penalty on a 3rd down incompletion. It should have been Weatherford out for another boot of the ball, but with new life, Jennings continued his effective start, and picked up 6 yards on first down. Eli then threw a ball headed for a ‘pick-6,’ but the CB dropped a clean shot at the end zone with no one in front of him had he intercepted the ball.

What also seemed like a theme tonight was the Giants to get Eli out of the pocket with either a shot-gun or roll out call, fearing the inability of their OL to keep the Jets D off his back.

Rolling right, Eli threw a ball that he had no right throwing trying to hit Cruz, but the ball was, again, an incompletion.

R. Randall caught a nice ball on another roll out call to get the Giants into Jets territory for the first time of the night. But on second down, the Jets D got to Eli, which caused a fumble that rolled out to one of the OL to keep possession, but made it 3rd and 19. Eli threw away the possession in to the RB’s feet with entirely too much pressure to get anything positive. Another punt.

The Giants turned to Jennings out of the backfield once again, and he grinded out a 5 yard gain on 1st down. But the Giants showed the run and the Jets read the run , so on 2nd down the Jets D drove Jennings back for a loss of 4. On 3rd and 9, a delay of game penalty on the Giants offense was a result of the Jets showing 9 defenders in the box ready to come hard with a blitz package.

The crowd noise and the defensive pressure caused Eli to let the play clock expire and back them up 5 for a 3rd and 14. After still showing run and making no adjustments, Jennings ran right into the line of scrimmage for only a gain of 1. It was time for Mr. Weatherford again. Punt!

Eli stood in shotgun and threw a 7 yard out on first down to try to get into any type of rhythm. Jennings was the only bright spot of the offense in the 1st half so far, and they turned to him again. He broke away for a nice 23 yard gain over the right side of the line, but the offensive line gave 10 yards back on a holding call that set them back 1st and 20.

The Jets defense showed blitz and brought it on 2nd down, getting to Eli again, which caused hi to throw another ball towards the stands. Eli completed a 5 yard out to Manningham to get to 3rd and 15, but with a screen called on 3rd down, the Giants got caught on another holding penalty. It was declined, resulting in the Jets getting the ball back.

*This drive also resulted in the loss of WR Marcus Harris who went to the locker room with an apparent hand injury.

Result of the drive … punt!

So far, the Giants starting field positions and possessions have looked like this:

We will get to result of the fifth drive in a moment.

This drive started on their own 33 — their best starting field position of the half — so it might lead to something right?

Taking over with 6 minutes in the half after a Jets punt, it started how the last drive ended. Eli rolled out throwing a ball away when the Jet D overpowered the Giants OL again! They put tons of pressure on Eli who barely got out of the tackle box to throw the ball away.

The second down was uglier! Once again, Eli was over pressured and forced to roll out to his left, where he hoped to get into a position to throw the ball away and just give up the down. Instead, he took too long and the Jets defense forced a fumble that luckily rolled out-of-bounds, resulting in a 9 yard loss on the play to bring up a 3rd and 24.

Adding injury to insult, OL man Geoff Schwartz went down with a knee injury and had to be carted off the field, so his timetable to return won’t be known until the week progresses.

With a simple run up the gut for a gain of 4, the Giants were once again held for a loss of -10 yards on that drive, so…

As it stands, Eli is 5 for 11 with 50 yards in the first 5 drives of the game. That would almost make it the worst 2 and half games in pre-season ever. Then the clouds and the fog lifted and a light turned on!

It happened on the 6th and final possession of the half. The Giants got the ball back with 1:53 and all 3 timeouts left to try to put something together. They started back at their own 9, continuing the poor field position theme so far, but Eli came out with an agenda! A quick 5 yard out and then another 9 yard out opened the field a bit to get out of their own red zone. With 1:21 left the Giants used their first time out of the half.

In shotgun, Eli again completed a nice 16 yard out to the left to Victor Cruz. Eli was now 3 for 3 on the drive and the Giants actually looked like an NFL football team that knew what they were doing. And just as I say that, Eli throws a ball right in between the 2 and the 0 of Jets DB Nelson and throws an interception. But wait? Did he catch the ball in bounds? Replay showed that Nelson stepped out-of-bounds and came in to make the catch which is not a completion, so Eli got away with one for sure, but it was the 3rd possibility of an interception that night.

After been given new life, Eli quickly turned to his favorite target #80. ‘Cruuuuz’ was heard throughout the stadium after a gain of 18 and a first down. With the clock running, the Giants handed the ball to Jennings one more time and he chalked up a 7 yard gain on first down, making the play book wide open for a 2nd and 3 call.

First and 2nd downs were uneventful to put it lightly, with Eli basically throwing balls away on rollouts, but on 3rd down the ‘Cruuuuz’ chants came again with another 19 yard gain. Could it be that Cruz and Manning were finally doing what Big Blue world has been hoping for all pre-season and building an on-field relationship?

In the Red Zone with first down with :24 seconds left in the half, Eli, once again in shotgun, found Jernigan for a nice gain of 8. The Giants quickly called their 2nd team timeout with :16 left in the half.

2nd and 2, Eli again rolled out and was forced to throw a ball into the stands for an incompletion.

After a false start on the O-Line pushing the play to 3rd and 7, the Giants hit pay dirt. This play was meant for the end zone and that is exactly where it ended up. Eli had enough time to ‘bake the proverbial cake’ in the back field! He was feeling no pressure and found Manningham from the back of the left end zone for a TD catch! Finally, the Giants offense showed us something! A 91 yard drive started from their own 9 with 1:53 left and 11 plays later they were on the board!

So what to take from all of this? Going into the last drive of the third pre-season game, Eli was 7 for 27 and had no positive production to speak of. Can this one drive be the cure-all for a struggling offense that has a new Coordinator trying to implement a new offense? From what I’ve seen so far, this is a Giant concern and there isn’t much time left for the OL to get on the same page!

What will be the story of the New York Giant offense be when the 2014-15 season is over? 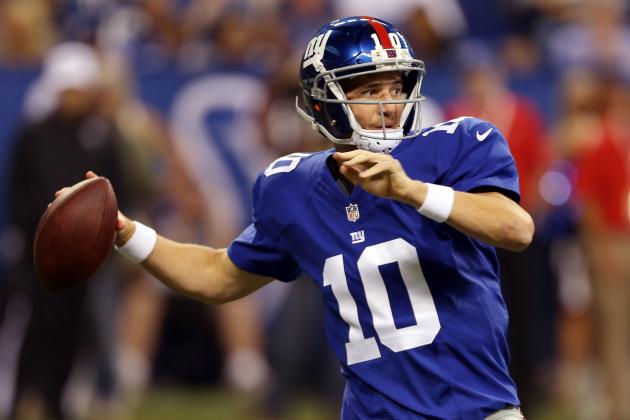