This was the first regular season, divisional matchup between the two teams since the Stanley Cup Playoffs last season where the Rangers routed the Penguins in an electrifying seven game series.

On this night, the victorious Rangers were supported by a fearless Henrik Lundqvist in the net with an overwhelmed Marc Andre Fleury on the other end for the Penguins. On their best nights, there cannot be a better goaltending matchup than between The Flower and King Henrik.

The first penalty of the game at 0:57 involved Ranger Mats Zuccarello and Penguin Sidney Crosby in front of the Pittsburgh goal, which sent the Penguins’ Captain to the penalty box for Interference. Smart play by Fleury in net helped the Penguins with one man down.

During the two-minute power play the Rangers were held to 3 shots and 0 points, making it 38 straight penalties killed by the Penguins’ PK unit. The Rangers set a fast pace for much of the first period of play, with Martin St. Louis sending his best to the Pittsburgh net. It was obvious that momentum carried over from the most recent previous playoff series, like the one between these two teams in April.

Lundqvist caught a big break, aided by former Penguins forward, Tanner Glass, when the forward smacked the puck from the goal line, out of the crease and down the ice toward the offensive zone. Zuccarello won the next  face-off and wristed the puck over the left shoulder of Marc Andre Fleury to notch the first goal of the game, assisted by Derek Stepan at 8:23.

Soon after, at 10:59, Marty St. Louis used fast, skillful skating and was rewarded for a spectacular first period, as he sent the second goal past the Pittsburgh goalie to make the game 2-0. Assists for the second goal were credited to Rick Nash and Marc Staal of the Rangers.

New York swarmed the net and struck once again, catching the Pittsburgh defense on their heels with assists from Kevin Hayes, former Penguin Lee Stempniak and a snap shot from former Nashville Predator, Kevin Klein, sailed the puck past Fleury’s glove hand, raising the score to 3-0.

Excellent saves from King Henrik kept the Penguins from scoring during first period, even though Pittsburgh’s prolific power play hit the ice with 48.6 seconds to go. A strong Rangers’ start was highlighted by winning puck battles, a tough forecheck and relentless puck chases.

The second period was all about New York offense, even though it began with a Pittsburgh power play as a result of a Hooking penalty by Rangers’ Derek Stepan. Without giving up a short-handed goal, the Rangers answered back with relentless pressure on the Penguins’ defense. New York had a near miss as a flurry around the Penguins’ net resulted in a play review. The call was no goal, as the referee concluded that Fleury was interfered with  and play continued.

The Rangers went back on the power play at 9:15  in the second due to a Roughing penalty by Penguins’ Steve Downie.  Making it 4-0 on the power play, Derick Brassard rocketed a shot  over Fleury’s glove hand from the right face-off circle. The goal ended the Penguins’ penalty killing streak at 39 and shined a light on what had previously been a lackluster Rangers man advantage. Up to this point, the contest proved that a goaltender is only as good as the defense in front of him.

Rangers’ Dan Girardi was sent off for Hooking at the start of the third  to put the Penguins on an unsuccessful power play.  Momentum stayed with New York, even when short-handed, as forward Rick Nash stole the puck and scored a goal against Pittsburgh’s first power play unit, including star defenseman Kris Letang. Fan favorite and fast-paced 4 on 4 hockey ensued with a Boarding penalty being served by Rangers’ Tanner Glass and Unsportsmanlike Conduct being served by Letang at 8:45.

Time expired on the Rangers’ penalty and a minute long power play continued without result, as play resumed to 5 on 5.  The rest of the period included shut-down defense by the Rangers and flawless play by netminder Lundqvist. The usually high-scoring offensive juggernaut that is the Penguins, could not produce a point, their seven game winning streak snapped by the Rangers who were happy to break their own two game losing streak.

With this win, the Rangers slid within one game of the Philadelphia Flyers in the divisional standings, however, remain in last place.

New York played playoff level hockey, running over a strong Pittsburgh team and helped King Henrik to record his 53rd career shutout.  The next meeting between these two teams will take place on 15 November 2014. 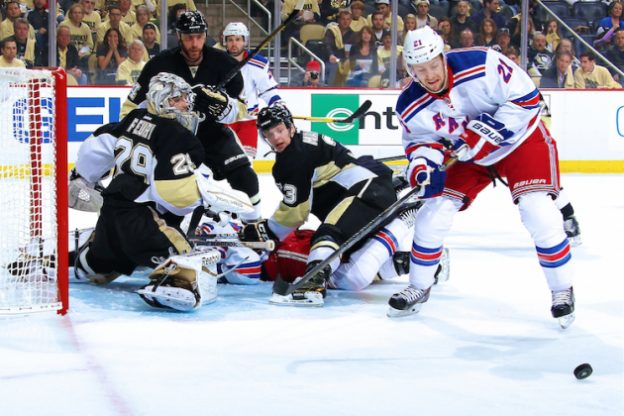