Skip to content
You are here
Home > Boxing > Nigel Benn vs Gerald McClellan: A Beautiful War and it’s Tragic Ending 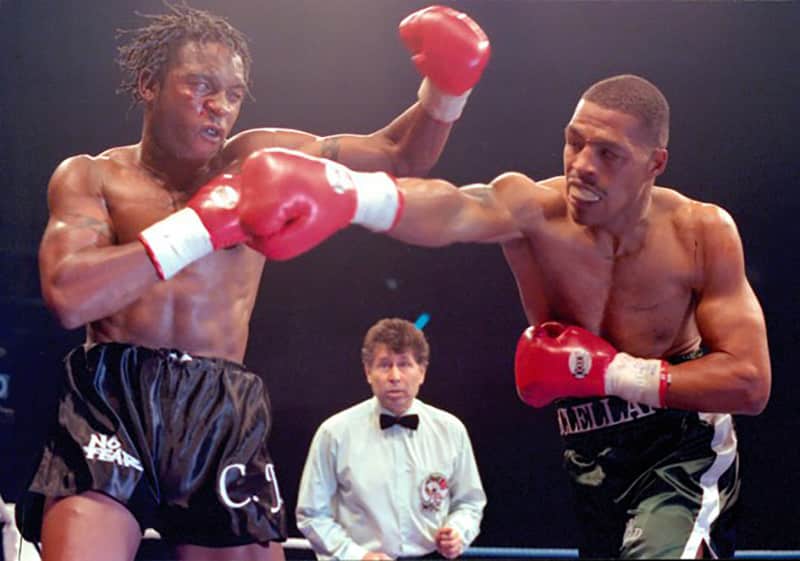 BOXING AT ITS MOST BRUTAL.

💥Nigel Benn vs Gerald McClellan💥 was a professional boxing match contested on 25 February 1995 for the WBC super middleweight championship. Benn was victorious when Gerald McClellan was counted out in the 10th round while dropped on one knee.

Shortly after the match ended, McClellan collapsed and fell into a coma for two weeks and has never recovered he is now under the 24 hour care of his sister Lisa.

Within 35 seconds of the first round, Benn was knocked out of the ring by McClellan, but came back strongly in round two with his usual ferocious style.

According to McClellan’s sister Lisa, at the end of the sixth round he said to his trainer, Stan Johnson: “I wanna quit, Stan”, a claim Johnson strongly denies.

The following rounds were “a brutal, yet exhilarating back-and-forth contest that saw both combatants give as good as they took”.

Benn gained control of the fight for the following six rounds, before McClellan came back to take the eighth by knocking down Benn for a second time in the contest. In the ninth, a tired Benn was missing with his “wild” punches, and the force of one caused him to fall forward and accidentally headbutt McClellan, an incident which appeared to significantly affect McClellan’s physical well-being.

The fight entered a tenth round; McClellan had never fought past the eighth round in his career.
At the midway point, Benn connected with a right hand, causing McClellan to drop to one knee.

The referee began his count until McClellan stood back up at seven, and the fight continued after Asaro checked McClellan and the Showtime commentary team claimed it was “The strangest knockdown they had seen”.

Nobody at this point could have known how serious the injuries to Gerald McClellan could be.

Soon after the pair were at it again though, Benn connected with another thunderous right, and again

McClellan dropped to a knee, this time allowing Asaro to count him out and blinking his eyes heavily, McClellan was clearly not right.

Sadly shortly after the fight Gerald would collapse and fall into a coma.

Actor Daniel Day-Lewis, who was attending the fight as part of his training by Barry McGuigan in preparation for the film The Boxer, was “dumbstruck” by the fight and said the events of that night will stay with him for all of his life.

From a personal point of view this fight is always on my mind when people ask me about epic wars, I’m always reluctant to say so though because of the tragic finale.