Everton came out as the favourites to win as the make their way to the fifth round of the FA Cup after defeating League One opposition Stevenage Borough 4-0 at Broadhall Way.

Rotation man Steven Naismith bagged two goals for the Toffees in the first half of the game to give Toffees the ability to control the game before substitutes Johnny Heitinga and out of favour Magaye Gueye put the icing on the cake to secure the victory for Roberto’s Martinez’s side.

Another injury concern for Everton as winger and full-back Bryan Oviedo suffered a double leg break while going in for a tackle on Simon Heslop.

Apart from the injury concern, Everton had no problems playing on a battered and weathered pitch to secure a victory in a very high professional fashion and to keep up the hope of winning the trophy that Martinez won last year with Wigan Athletic last season.

Stevenage only had one real chance of scoring in the opening minutes of the game when Everton second choice goalkeeper Joel Robles failed to gather up a long ball although Lucas Atkins failed to convert a golden opportunity after his shot was blocked off the line by Toffees defender John Stones.

The missed opportunity was punished after Kevin Mirallas’s shot was saved by the Stevenage keeper but new signing Aiden McGeady teed up Steven Naismith for a 1-0 lead.

The injury of Bryan Oviedo caused a six minute delay to the game; seeing sympathy all around the stadium as he was carried off; sympathy messages from the footballing nation all wish him well and hopes he makes a swift recovery.

Stevenage lost all momentum as Everton seemed to wrap up the game early on in the game in the 32nd minute as scorer Steven Naismith grabbed his second of the game after a mistake by Borough defender Jon Ashton only to beat keeper Chris Day in a composed and calm fashion.

Even though Johnny Heitinga still intends on leaving in this January window, the Netherlands international scored to make it 3-0 after coming on to replace Phil Jagielka.

And to finalise proceedings to the game, out of favour left midfielder Magaye Gueye prodded home to seal a 4-0 victory for the Toffees.

Everton’s opponents for the fifth round is yet to be confirmed as of yet. 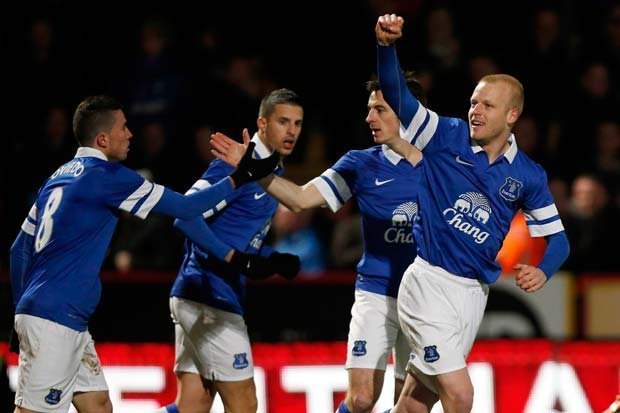