After losing starting small forward Trevor Ariza to the Houston Rockets in free agency last July, the Washington Wizards knew they had to had to make a move to stay competitive in the Eastern Conference. They ended the 2013-14 season 44-38 and were coming off their best campaign in nine years.

Washington also advanced to Conference Semi-Finals of the NBA Playoffs where they were eliminated by the Indiana Pacers in six games. When free agency rolled around the Wizards were forced to make the tough decision regarding Ariza.

They ultimately decided not to re-sign him and he wound up taking a four-year, $32 million offer from Houston. Ariza was a big part of the Wizards turnaround and the only other options to fill his absence were second-year forwards Otto Porter and Glen Rice Jr. Both were unproven and it would have been a gamble to promote either player.

Meanwhile, Paul Pierce had just finished his 16th season in the league. He was coming off his first season suiting up for the Brooklyn Nets following 15 years in a Boston Celtics uniform. After the Nets finished the season 44-38 themselves, they were also eliminated in the Conference Semi-Finals (to the Miami Heat in five games).

Washington making it to the second round was seen as a huge step forward. Meanwhile, Brooklyn’s season was considered disappointing. The Nets had to pay a record $197 million in salary in luxury taxes after making the 2013 trade with Boston for Pierce and former teammate Kevin Garnett.

Pierce was a solid contributor for Brooklyn in 2013-14, averaging 13.5 points per game, 4.3 assists per game and 4.6 rebounds per game. The Nets knew they had to make some changes and cut some contracts from their books so the league’s 18th leading career scorer (25,453 points) became an expendable.

He became a free-agent when his contract expired and he had to make the choice whether to retire at age 37 or play with a third team in three years. That’s when the Wizards came calling. Washington and Pierce agreed upon a two-year, $10 million contract giving the team a strong veteran player at a position of need.

He has been an invaluable piece to the puzzle for the Wizards this season. Washington currently sits at 25-11, good enough for second in the Eastern Conference. Pierce (12.8 PPG, 3.5, APG, 4.3 RPG) has fit in with his new teammates seamlessly.

Even though he is no longer the go-to option for his team, he can still put the ball in the basket when called upon. He is just as efficient as ever but he is playing the fewest amount of minutes since he began his NBA career in 1998. He is shooting 45% from the field, as well as 38% from the three-point line, which matches up favorably with his career stats.

His long-range shooting has been a boon for his new team. Washington is leading the NBA in three-point percentage at 39%. Defensively the Wizards rank fifth in the league, holding the opposition to 97.29 points per game. Pierce played for some of the toughest defensive units of the past 10 years in Boston and he has preached “good defensive habits” to the Wizards.

Overall, the combination of Paul Pierce and the Washington Wizards has been a match made in heaven this season. The team relies on two young stars (John Wall and Brad Beal) and having a veteran with Championship experience has really taken Washington to the next level. They will be a contender come Playoff time and although he won’t get the headlines, Pierce will become a large factor determining how far the Wizards advance. 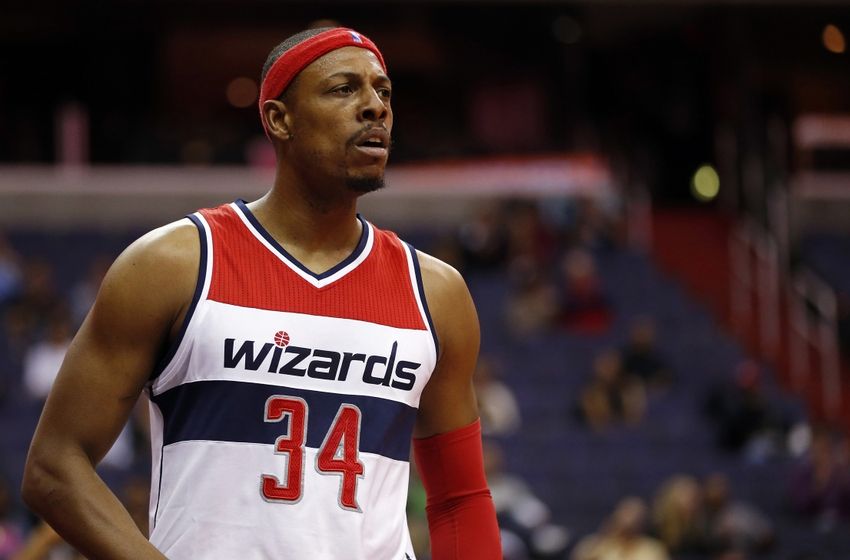