The Baltimore Ravens were a team in desperate need of a win after losing two straight divisional match-ups, and they delivered on that need as they defeated the Tennessee Titans 21 to 7.

Baltimore has always relied on the running game from guys like Jamal Lewis to Willis McGahee to Ray Rice, but the Ravens are now relying heavily on the legs of Justin Forsett to carry the rock and push the Ravens forward. Forsett yesterday showed Raven fans why he’s the top guy in the stable of running backs in Baltimore as he ran for 112 yards and had two touchdowns on the afternoon. Justin Forsett became the 2nd Raven (Lorenzo Taliaferro) and 22nd overall player with at least 2 rushing touchdowns in a game this season.

The Ravens defense had been heavily scrutinized over the past few weeks by giving up a ton of points including 340 yards and six touchdowns to Ben Roethlisberger last Sunday night. Against the Titans however, the defense stepped up and delivered one of their finest performances all season. The Baltimore defense produced two turnovers, five sacks and plenty of helmet-ringing hits on rookie quarterback Zach Mettenberger. “The catalyst was really our defense, obviously,” Coach John Harbaugh said.

The Ravens (6-4) repeatedly harassed rookie quarterback Zach Mettenberger, who went 16 for 27 for 179 yards and an interception in his first road start in the NFL. Tennessee didn’t get its initial first down of the second half until 4:37 was left in the game.
The rookie was not pleased with his performance but gave credit to the rock solid Ravens defense after the game. “They got a lot of dudes, they got a lot of studs in that front seven — and they know it.”

ALSO READ:  NFL: Mayfield traded to Carolina – What does it mean?
Mettenberger’s tough day continued as he was sacked yet again.

Titans Head Coach Ken Whisenhunt however, didn’t blame all of the inconsistencies on Mettenberger. “”He did some good things today, made some good throws,” Whisenhunt said.”I think he did a nice job of operating today in this environment, which is not easy. But obviously, we have to be more productive.”

Along with the tough loss to a very good Ravens squad, the Titans lost starting tight end Delanie Walker in the second quarter with a concussion. Walker, who came in tied for the team lead with 35 catches, got his hands on a pass and was turning up field when struck high and hard by Terrence Brooks.

With the victory, the Ravens go to 6-4 on the season while the Titans dropped to 2-7. The Ravens get a much-needed rest with their bye week coming up while the Titans will be playing on Monday night against a Steeler team looking to rebound from an embarrassing loss to the Jets. 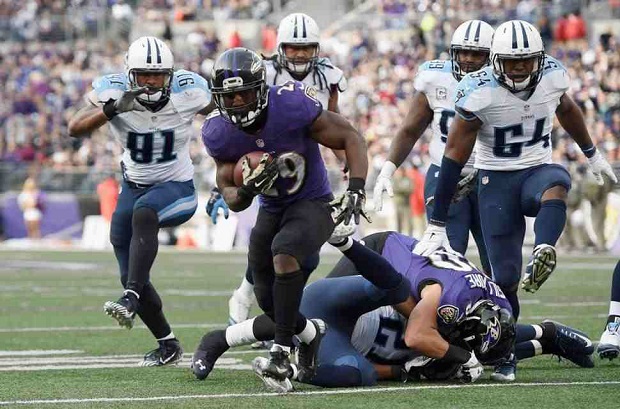