Real Madrid’s lineup saw newcomers Toni Kroos and James Rodriguez make their debut. Meanwhile, Sevilla was without Alberto Moreno, who is close to signing for Liverpool FC after agreeing a fee of around £12 millions earlier in the day, according to several media outlets.

The match was off to a slow start, with neither teams coming close to scoring, but there were still plenty of pace in the match, mainly from Gareth Bale, James Rodriquez and of course Cristiano Ronaldo. It was also from those 3 the chances came, and in the 30th minute, Ronaldo scored the first goal of the evening, following a beautiful cross from Bale.

Not much else happened in the first half, bar a few good chances for both teams. One of these chances fell in the 34th minute, where James Rodriguez and Sergio Ramos failed to clear a ball, giving Carriço a clear shot at goal, but a great save from Casillas kept the score at 1 – 0.

The second half got underway, and Ronaldo quickly doubled Real Madrids lead to 2 – 0, after beautiful exchange play between Benzema, James Rodriquez and Ronaldo. After this, Real Madrid was in clear control of the match. James Rodriguez came close to scoring in the 68th minute with a powerful shot at the edge of the box, but a great save from Beto in-goal denied him.

The final 20 minutes of the match were slow in nature, with Real Madrid still in control. Both sides made substitutions, with Iago Aspas making his debut for Sevilla, and Isco replacing James Rodriguesz.

The best chance for Sevilla fell in the 89th minute, where Krychowiak had a straight shot at the Madrid goal, with pith plenty of pace behind it, but Casillas made a great save to deny him.

This chance initiated a period of dominance for Sevilla with numerous corners and shots at target for Sevilla, but none finding the back of the net. The match ended 2 – 0, and Real Madrid could take the Super Cup trophy home. La Liga begins in 2 weeks, with Real Madrid kicking off against Cordoba and Sevilla FC against Valencia in their first match of the season. 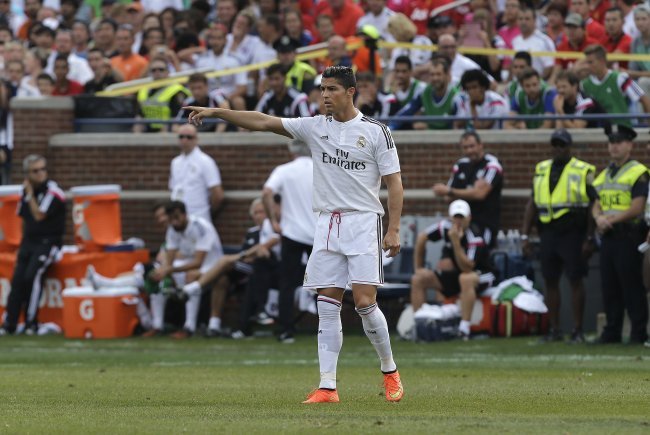