Real Madrid and Atletico Madrid met today in the first leg of the Spanish Supercup, and the match ended in a draw, with the score finishing at 1 – 1.

James Rodriguez and Raul Garcio were the two goalscorers for Real Madrid. The match was the first of two, the next one being in the 3 days.

The first half was a rather slow affair, with neither team coming close to scoring. There were a couple of early yellow cards to Atletico Madrid players Koké and Guilherme Siqueria. Especially the challenge from Siqueria was a very malicious tackle, where he might have been lucky to avoid a red card.

Neither teams created much in the first half. James Rodriguez replaced Ronaldo at the start of the second half, which were off to a more lively start than the first. Gareth Bale had a great shot saved in the 48th minute by Moyá.

A controversy arose around the 60th minute, where Sergio Ramos hit Mario Mandzukic in the face after a clumsy challenge from Mandzukic, which resulted in both players receiving a yellow card. Sergio Ramos in my opinion deserved a red card here.

Real Madrid had a great opportunity to score in the 69th minute after a funny free kick situation. Sergio Ramos initially took the free kick, but it had to be retaken, after the referee decided that some of the Atletico players had crossed the line left by the vanishing spray. Raul Garcio was booked for the offense. Gareth Bale took the second free kick, which was saved by Moyá. The rebound left a great chance for Toni Kroos, but he amazingly missed from a few feet out.

Angel di Maria replaced Luka Modric in the 77th minute and immediately had an impact. This resulted in the first goal of the evening, coming from James Rodriguez in the 81th minute. Toni Kroos played Daniel Carvajal through, who then placed the ball for Karim Benzema, but he was tackled in the last-minute. The ball bounced back to James, who could then score his first goal for Real Madrid.

An equalizer fell in the 88th minute after a corner kick. Raul Garcia managed to get a foot on a loose ball in the box after Real Madrid failed to clear the ball. Another controversy fell in the 90th minute, where Real Madrid felt cheated for a penalty kick after a shot was blocked by the hands of Atletico’s Mario Suarez.

The match ended 1 – 1, and the return match will be this Friday, at the Atletico Madrid stadium, Estadio Vicente Calderón. 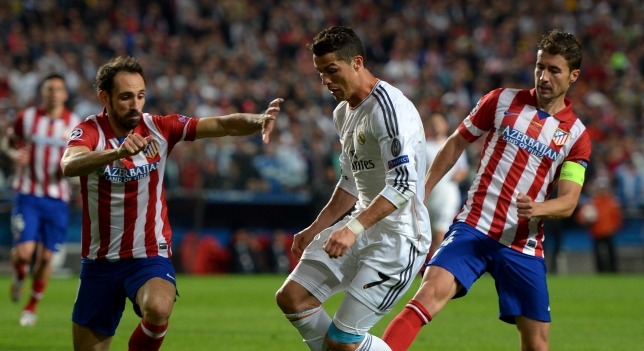