A wonderful innings today from Rohit Sharma saw him hit a world record score of 264 to become the first batsman to score a double century in a one day international. His score came off 173 balls, including 33 fours and 9 sixes all of which helped India round-off a clean sweep series win against Sri Lanka.

Going in to the fourth one day ODI, India had already won the series after building up a lead of 3-0. Rohit Sharma and co didn’t let up at all in the fourth and final one day international. India raced away to a 404-5 lead over Sri Lanka while the visitors only managed a reply of 251 with India winning by 153 runs.

Sharma’s record-breaking innings was previously held by fellow countryman Virender Sehwag who scored 219 against the West Indies in 2011. He also became the only man to score two double centuries in ODIs after he hit 209 last year against Australia in Bangalore.

Rohit Sharma survived an early scare in the fourth over when he was dropped by Thisara Perera when he was just on four runs. He made up for that in an excellent reprieve. First he reached his 24th one day half-century off 71 balls, followed by his first sixth of the day as his partnership with Virat Kohli passed the 100 mark.

The acceleration from 100 to 250 was set at a phenomenal pace, taking only 66 deliveries. He was dropped a further two times in the 46th and 47th overs after which a demoralised Sri Lanka all but surrendered defeat.

He became the first batsman to score two double hundreds in ODI cricket and the highest score in one day internationals reaching 264, being the first one to hit a 250+ score.

“I’m not really tired, I was ready to bat another 50 overs,” said Rohit. “Once I got to 50, I knew I had to convert because it was a good batting wicket.

“We wanted to get a big score and that made me stay there as long as possible.

“Kolkata is a very special ground to me, I made my first-class debut and Test debut here. I also got an IPL hundred here, so it’s very special.”

The 27-year-old was caught at long-off from the very last ball of the innings; the record-breaker left the field to a guard of honor and a standing ovation from his team-mates

Despite breaking the previous best international score by a whopping 45 runs, Sharma fell marginally short of the record in all limited-overs cricket, which is held by Ali Brown who scored 268 for Surrey against Glamorgan at the Oval in 2002.

All four ODI double-hundreds have been scored by Indian batsmen, with Sachin Tendulkar the first to reach the landmark against South Africa in 2010. 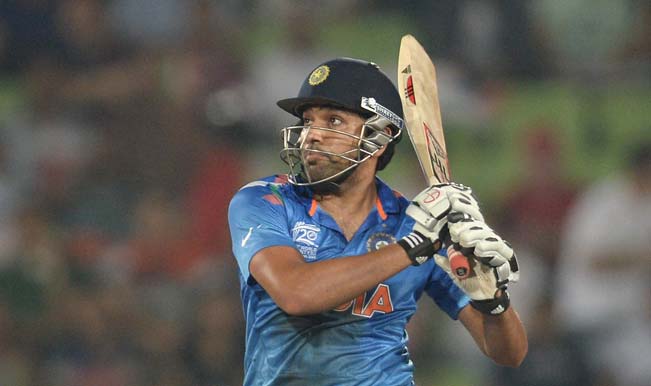