With fresh tires, Blaney was closing on Busch with 10 laps remaining, but still had to try everything in his power to get by him. Busch blocked hard, a couple times forcing him onto the apron, but Blaney eventually got by him after spending two turns side-by-side,thanks in large part to the fresher rubber,as Busch decided against pitting late,that ended costing him,as he finished the day in 9th place.

On Sunday, Blaney led the infamous No. 21 Ford back to Victory Lane at Pocono for the first time since Trevor Bayne won the 2011 Daytona 500.Blaney had a two-car lead on Harvick coming to the line with four laps remaining. Harvick continued to lurk behind the 21 car all the way to the white flag. Blaney beat Harvick to the line by 0.139-seconds.

He led the final 10 laps to win his first Monster Energy Cup Series win in his 68th start.Blaney was the third first-time winner of 2017. Kevin Harvick was second followed by Erik Jones, Kurt Busch and Brad Keselowski.Truex, Larson, Elliott, Kyle Busch and Kenseth rounded out the top 10.

“It’s a hard one to process,” Blaney said in an interview in Victory Lane. First, we had to pass Kyle (Busch), he was older tires and he was struggling on older tires.

“Then, we had to hold Kevin (Harvick) off. He was really fast all day. I just didn’t want to make a mistake – that would have been the worst thing to do. I have to thank him for racing me really clean.

“It’s the Wood Brothers’ 99th win and that’s really special and it was a lot of fun.

Kyle Larson emerged on the final lap of Stage 2 in Sunday’s Pocono 400 at Pocono Raceway to take the Stage 2 win in the No. 42 Chip Ganassi Racing Chevrolet. This marks Larson’s third stage win of the season,he finished the day seventh.

Next week we head out to Brooklyn Michigan for the FireKeepeers Casino 400. 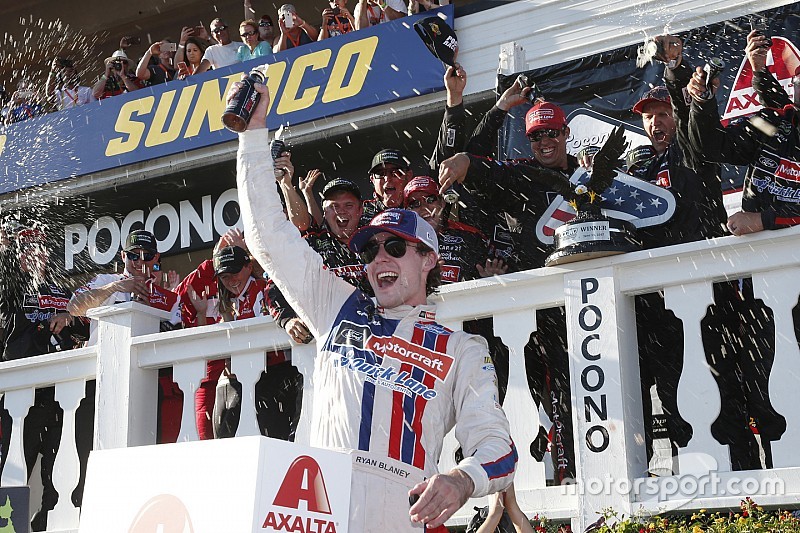