Luis Nery (31-0, 24 KO) formerly won the WBC Bantamweight title against Shinsuke Yamanaka in 2017 but lost it on the scales in his maiden defence. He moved up to 122-pounds in 2020 and claimed the vacant WBC Super Bantamweight strap with a tough-fought 12 round unanimous decision against Aaron Alameda (25-0).

Brandon Figueroa (21-0, 16 KO) claimed the WBA Interim title in 2019 and was upgraded to full champion in 2020. He has made two defences of his WBA (Regular) title against Julio Ceja fighting to a split-decision draw and Damien Vasquez who he stopped in the 10th-Round on the September 26 Charlo PPV Doubleheader.

Also on that doubleheader, Nery beat Alameda to perfectly set up this fight between two existing 122-Pound title holders. According to WBA rules, you are not allowed to unify with the secondary version that Figueroa holds but it is reported that both titles will be on the line for Nery-Figueroa.

French-Moroccan WBC Champion Nordine Oubaali (17-0) was scheduled to make the mandatory defence of his title against Donaire on December 12, 2020, but France’s COVID lockdown left Oubaali unable to secure a visa in time. After testing positive for COVID-19, Nonito Donaire withdrew from a vacant title fight on December 19.

This fight has now been rescheduled to headline a Showtime Boxing tripleheader on May 29. WBA/IBF champion Naoya Inoue is expected to make the mandatory defence of his IBF Title against Michael Dasmarinas on June 19 allowing him to unify later in the year either with the Oubaali/Donaire winner or WBO Champion John Riel Casemiro.

Undefeated WBC Middleweight Champion Jermall Charlo (31-0) returns to action on June 19 when he takes on Mexico’s Juan Macias Montiel (22-4). Montiel has lost at a significantly lower level and has never really beaten anyone of note to date with the exception of his first-round knockout over James Kirkland in December 2020.

Charlo-Montiel is a bit of a let-down as Jermall Charlo has needed a big fight and Eddie Hearn and Demetrius Andrade have repeatedly offered Charlo and PBC a unification fight which they even allowed to take place on Showtime Boxing but the much anticipated Charlo-Andrade unification has not come to fruition. 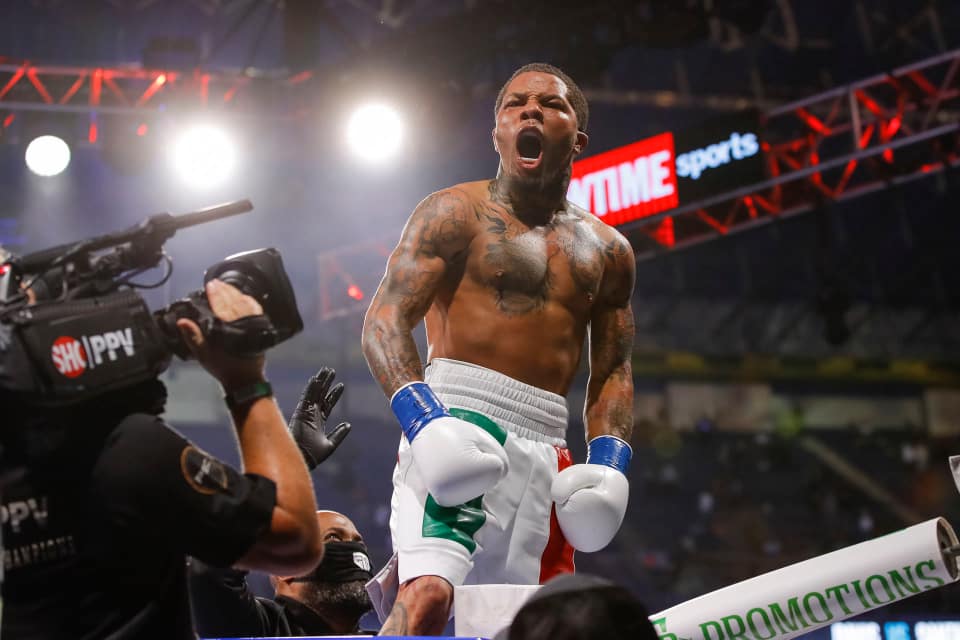 130-Pound WBA (Super) Champion and 135-Pound WBA (Regular) title-holder Gervonta ‘Tank’ Davis (24-0, 23 KOs) will move up another weight class when he challenges undefeated WBA (Regular) 140-Pound champion Mario Barrios (26-0, 17 KOs) on June 19/26 on Showtime PPV at a venue and location yet to be determined.

Gervonta Davis made his PPV Debut with a Knockout of the year candidate against 4-weight Mexican world champion Leo Santa Cruz back in October 2020 and will continue his journey to stardom and Pound-For-Pound ascent on June 19/26 when he attempts to become a 3-weight world champion by dethroning Barrios.

Barrios won the vacant WBA Regular title against Batyr Akhmedov (7-0) in 2019 on the Spence-Porter PPV undercard in a very tough fight where two knockdowns secured a close points win. Since then he has made the one defence of his ‘secondary belt against Ryan Karl (18-2) who he stopped in the 6th-Round on the Tank-LSC PPV Undercard.

WBA Interim Super Featherweight World Champion Chris Colbert (15-0) makes the first defence of his title against veteran Cuban Yuriorkis Gamboa on July 3. Gamboa is a tested veteran and has come short at the elite level, he now moves down to attempt to derail young prospect Chris Colbert on Showtime Boxing.

Should Colbert win he will either be elevated to full champion, have a blockbuster inhouse PBC PPV fight with WBA Super Champion Gervonta ‘Tank’ Davis or have to faced WBA Regular champion Roger Gutiérrez for the vacant Super title.

This comes as a surprise as Charlo’s last card was on Showtime PPV when he unified the division against WBA/IBF Champion Jeison Rosario but poor PPV buys (100-120,000) may have influenced Showtime to place Charlo-Castano on regular Showtime Boxing in the pursuit of large ratings instead of a poor-performing PPV.

Charlo-Castano will see another 4-belt champion be crowned and should the American get through Charlo he will have a strong argument to feature in any P4P list. Both boxers are affiliated with Al Haymon’s PBC and TGB Promotions making this fight very simple to make as both boxers wanted it.

WBO Champion Philipine’s John Riel Casemiro (30-4) won the World title in an upset win over South Africa’s Zolani Tete in the UK on a Queensberry promotions card in 2019 and was scheduled to face Naoya Inoue in a big unification fight but was postponed due to the pandemic. He now faces a very awkward and tough challenge in Guillermo Rigondeaux (20-1).

Rigondeuax is a multiple-weight world champion and former P4P fighter with his only defeat coming to Ukranian Great Vasyl Lomachenko when he was fighting well above his weight class; he now returns to his natural weight class and a win here for either fighter would see them target the Oubaali/Doanire winner later in the year.

David Benavidez (24-0) lost his WBC title on the scales in august 2020 when he was overweight for his defence against Angulo and strived to rewin the title by competing in multiple WBC eliminators with the first being Ronald Ellis who he stopped in March. He now faces Jose Uzcategui (30-4) in September. A win here could make him a mandatory challenger to Canelo.

Showtime Boxing’s September 11 show is set to feature WBO Champion Stephen Fulton against the winner of their May 15 fight between Luis Nery and Brandon Figueroa but is wishful thinking on their part as 4 months may not be sufficient time if the winner has a tough fight, gets injured or cut.