A late header by Bafetimbi Gomis ensured Swansea recovered to beat a woeful Arsenal side. Failure to see out games late on coupled with Immaturity to hold onto the ball have proved pivotal in the Gunners downfall.

Two capitulations in the space of five days and failure to capitalize on commanding positions have led to ex player Paul Merson outlining the performance versus Anderlecht as “Tactically Clueless.” This damming verdict comes in the wake of comments made by Jamie Carragher who has since stated that “Arsenal are a club going backwards” in terms of Wenger’s side pushing on from last season’s FA Cup heroics. An instrumental figure in that 2013-14 FA Cup winning team, Aaron Ramsey is vastly looking a shadow of his mesmerising form last autumn. The Welshman needs to eradicate sloppiness surrounding his game and concentrate on the midfield basics, then improvement is a formality.

Swansea dominated the early proceedings with Jefferson Montero exploiting space down the right hand side on numerous occasions, and were unlucky not to take the lead early on as Marvin Emnes fired a low strike which was grasped by Szczesny.

There was no signs of unfamiliarity in Swansea’s play despite being forced to hand centre back Kyle Bartley and Dutch winger Marvin Emnes first starts of the season. Whilst Tottenham lone Tom Carroll was shafted in to account for Jonjo Shelvey’s absence through suspension.

As the first half wore on the Swans continued to mount on the pressure and exposed weaknesses in the Arsenal midfield which was totally unbalanced and consisted of no fluidity. Albeit doesn’t take much to beat an arsenal side full of frailties.

Alexis Sanchez almost got a clear shot at goal but, under pressure the Chilean was crowed out and was closely marked for long periods throughout. Unsurprisingly it was Swansea who had the greater attacking edge and had strong appeals for a penalty kick waved away by referee Phil Dowd. Chambers was the man in question, as the 19-year-old bundled into the back of Wilfred Bony from a tormenting Montero cross.

Arsenal offered very little on the attacking front during the first 40 minutes, until the lively Alex Oxlade-Chamberlain fired in a ferocious effort from outside the area, just shading Fabianksi’s post. The ex Gunner had to be on hand to deny Danny Welbeck and Aaron Ramsey, with the latter striking a dropping ball just wide of the mark.

The Gunners efforts finally paid dividends when Oxlade Chamberlain played through Welbeck, whose movement off the ball was impressive. He unselfishly found Cazorla who teed up the unmarked Alexis Sanchez three minutes after the hour.

Swansea’s substitutes were all instrumental in turning the game on its head compared to Wenger’s. Gary Monk introduced Mamadou Barrow, whose pace and driving force won the free kick which resulted in Sigurdsson’s leveller. The former Tottenham man’s stunning free kick was his second goal of the campaign. By this time the pendulum was swinging in favour of the home side, and Bafetimbi Gomis notched his first premier league goal which proving to be decisive after replacing an out of sorts Bony. Finally the Swan’s third change saw Monk introduce experienced Leon Britton who gradually saw the game out from a deep-lying midfield position.

The Gunners let slip a commanding position once again, highlighted by the fact that no player possessed any leadership qualities whilst defensive frailties proved so costly, on an evening when Arsenal’s Title charge looks all but over. 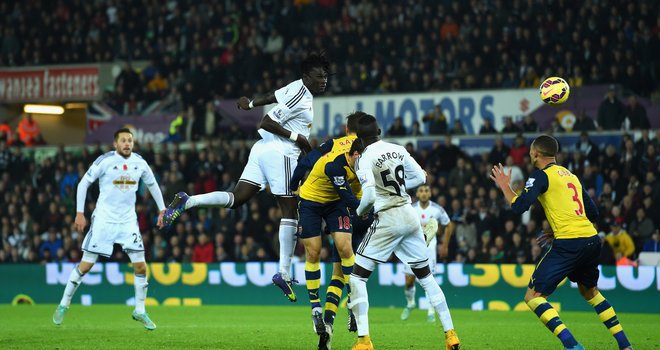