Based on team records, the Eastern Conference’s Indiana Pacers, who had the best record in the East and was the number one seed during the playoffs, would to the fourth seed in the Western Conference playoff picture.

Compare that to the Dallas Mavericks, who was the lowest seeded playoff team in the West with a 49-33 record. In the West, they were an eighth seed.

If they played in the East, their record would put them right behind Indiana and the Miami Heat as the third seed.

The inequality between the leagues was further elaborated by the total domination of the Western Conference Champion San Antonio Spurs over the Eastern champs Miami Heat.

The series was so lopsided, San Antonio set a record for point differential in an NBA Finals.

For the Eastern Conference, it is now time to look to the future. Many changes have happened throughout the Conference with trades, signings, and players return from injury. Barring any major events, the East will be a battle between these five teams.

For the second time in his career, a knee injury ended his season. Still, for the second straight year, Chicago, led by former Coach of the Year Tom Thibodeau and reigning Defensive of the Year Joakim Noah led Chicago to a playoff berth.

During the off-season, Chicago made a splash in free agency with signing four-time all-star Power Forward/Center Pau Gasol.

What Holds Them Back: For the second straight year, Chicago finished last in the league with points per game.

The success of the Bulls entirely relies on the knees of Derrick Rose and Pau Gasol.

Both players have been limited over the past seasons with knee aliments, and both players are the only players on the Bulls who can be a reliable scorer.

Miami Heat:Oh how the mighty have fallen. The once back-to-back champions was dethrone and blown out while trying to three peat.

After that signing, many people believed that Miami’s reign in the NBA was over. Within a week however, the Heat resigned stars Dwayne Wade and Chris Bosh, as well as replacing LeBron with two-time all-star Luol Deng.

Miami continued their free agency sale by signing veterans Josh McRoberts to help with their last place rebounding and Danny Granger as a scorer off their weak bench.

What Holds Them Back: Like Derrick Rose, what holds the Miami Heats back is the knee health of star player Dwayne Wade. Wade missed twenty-eight games and averaged the fewest amount of minutes in his career because of his deteriorated knees.

However, if Wade is able to show the same abilities that he had prior to LeBron’s arrival four years early, which at times during the season he still had, then Miami could be the first team since the Bill Russell Celtics to make five streak NBA Finals.

Indiana Pacers: The ending of the Pacers season was a final ending of a sad collapse of a team that by the all-star break, was called the favorites in the East. The off-season was just as worst with losing star player Lance Stephenson to the Charlotte Hornets.

Still, the Pacers the Conference’s best front courts with Roy Hibbert, David West, and Paul George. Barring a terrible collapse like last year, the Pacers still have the ability to go far in the East.

What Holds Them Back:Their lack of a conventional point guard to limit their turnover problem will hurt them. Along with the mental toughness of the team, and the leadership ability of coach Frank Vogel.

Players Roy Hibbert and Paul George have to show much more leadership ability as well as mental fortitude when in the postseason.

Washington Wizards:As one of the youngest teams in the league, the sky is the limit for the Wizards. Guards John Wall and Bradley Beal look to become the new Klay Thompson and Stephen Curry of the East as the best back court in the league.

The team was also able to resign big man Marcin Gortat to a long-term deal, as well as replace small forward Trevor Ariza with veteran Paul Pierce. Washington will be a headache to any team they go against.

What Holds Them Back: In their second round series with the Indiana Pacers, Washington’s inexperience showed during the last minutes of game, whether it be jacking up contested jump shots early in the shot clock, or trying to play “hero ball”.

The team’s talent is unquestioned. The question is does Washington have the experience and maturity to take the next step as a team.

Cleveland Cavaliers:It’s amazing how much one player can affect so much in the NBA, and no player affects more in an NBA game then LeBron James. In the player efficiency rating (PER), King James is second all time to Michael Jordan by only .12 (Jordan’s 27.91 PER to James’ 27.79).

Combine James with all-star guard Kyrie Irving, young talents like Dion Waiters and Tristan Thompson, and the number one overall draft pick Andrew Wiggins, whose athleticism has been compared to that of a young Lebron.

Cleveland could see a return to the glory days of the late 2000s.

What Holds Them Back: What holds them back is a long history of mistakes since LeBron’s departure in 2010. Anthony Bennett rookie year was beyond terrible, even for a rookie.

They bring in a coach, who I will give the benefit of the doubt, despite never coaching west of the Atlantic Ocean.

Also, there is the questionable health of Kyrie Irving, who missed his fair share of games in his young career, as well as LeBron James whose minutes seem to get higher and higher. 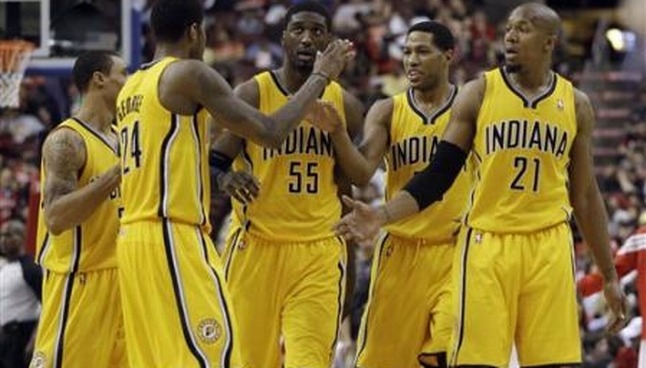