It is refreshing to see LeBron James, amongst others, talking about modern events, and not only bringing awareness to issues, but pushing for change. Unfortunately, young people in this country have a tendency to know the politics. Perhaps the greatest gift that James and the other athletes doing this provide is the push for young people to become more involved. The only issue that I take from this is that it is difficult to separate the peaceful protesters from the rioters in other people who are engaging in criminal activities in the name of protesting.

However, that is not James’ or anyone else’s responsibility. We need to remember that the incidents they are protesting about involve not only the local communities but also society at large.I feel as though the NBA did the right thing by not finding any of them.

Adam Silver statement is a well spoken, albeit typically legal, one. It reflects his desire to not only respect the athletes, but also respect the other people with whom the NBA does business; such as sponsors, venues, communities, and the police who aid in security.

The real struggle that the NBA house today is balancing the right of free speech amongst its players with the need to maintain good business relations as well as good communal relations during these turbulent times. The Donald Sterling scandal brought players in the commissioner’s office together in a way that no one foresaw; Silver is attempting to maintain that trust and that bond will still so maintaining good relationships with the NBA’s other business partners.

In the sense his greatest duty at this point in time is to protect the players especially the ones who feel as though they must express their opinions now. Lebron James, Derrick Rose, Kyrie Irving, and the others involved are merely doing what they feel is right, and I wonder what the response from the commissioner’s office would’ve been had they asked permission to do it ahead of time.

I doubt that the commissioner would have told him no, but I also doubt that he would’ve openly condoned it. The commissioners statement merely reflected the fact that he could not openly endorse their actions, and that he has to protect the NBA no matter what issues that may raise but the players. However, I feel of the players recognize that too.

The NBA is ultimately a business. However, we should remember that the players, owners, and executives of the league or all human beings with personal feelings, political views, and compassion for the other people in their community and society at large. When players take a stand on a particular issue, and that issue is about something going on in society at large, they should not be censored, but rather the league should embrace this as a sign of players doing right by the community and by the people who support their teams.

The players of the NBA are 80% African-American, and they were going to be sensitive to issues regarding racial violence and perceived discrimination. Considering all the serious issues that are plaguing this country with regards to race, violence, in the new issues of police violence, they have a right, in some would argue in obligation, to take a stand to do right by the communities, and to stand with the people who they feel need the support.

Now, on a final note, I feel that protesting should be done in a respectful manner. When the St. Louis Rams did the ‘hands up’ gesture in the wake of the Ferguson, MO protests, it raised so many eyebrows because of the nature of the protests, the line between protesting and rioting/looting; respect for the police versus holding them accountable; no one actually took the time to commend the athletes for taking a stand about something that was close to them.

Several Fox News ‘contributors’ questioned their intelligence, several asked if it was the proper venue for a protest, and the liberals responded in kind, defending their actions; most of whom, on both sides, by the way, were white (in the interest of fairness, I will acknowledge I am too).

I think it is a wonderful thing that African-American athletes are trying to remind young African-American men and woman who these issues are prevalent, and that they need to take a stand, or at least think about it. Roger Goodell, in his one great action this year, did not fine them.

Addendum: since I initially wrote this, the Georgetown Hoyas basketball team wore the “I can’t breathe” shirts, as a team. Good for them. 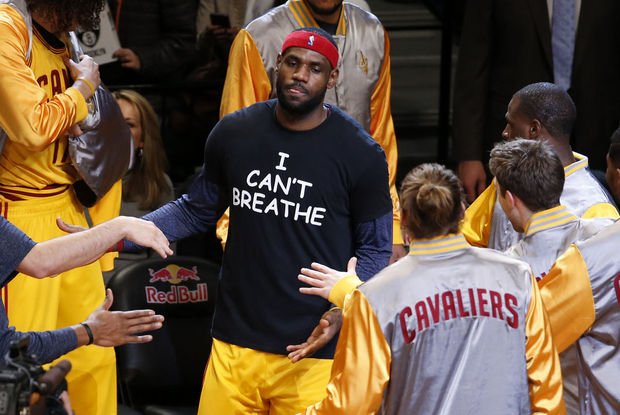