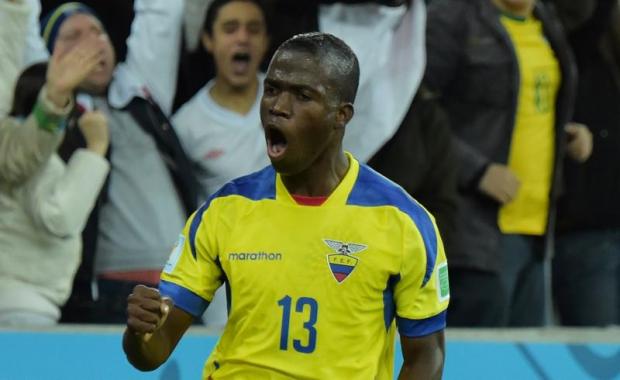 By Alexander Burton: Watching a player light up an international tournament is part of the reason we watch World Cups and other events. Messi dazzling or Robben thrilling are always taken for granted and there can be no doubt that they are world-class players.

But what about the rising stars? Those players that have risen from a more private background to star for their countries. Score three or more goals as a forward at the world cup and you will likely be proclaimed an excellent forward, and have some teams in the best leagues in the world chasing your signature.

Take Ecuador’s Enner Valencia for example. Valencia had an excellent world cup both in preparation and execution. He scored in three build up games, including against England, and then continued into the tournament with a goal against Switzerland and a brace against Honduras.

Unsurprising then that the English Premier League side West Ham United are reported to have bid 12 million pounds for his services.

Other outstanding players from this world cup would suggest that Giancarlo Gonzalez of Costa Rica and Gonzalo Jara of Chile should be playing for Barcelona or Real Madrid, when in fact Gonzalez plays for MLS side Columbus Crew and Jara was recently released by English Championship side Nottingham Forest.

Perhaps there is something about playing for their countries that brings more out of them, perhaps the style of football or sheer luck. Undoubtedly one thing that is certain is that is likely to be no shortage of suitors for Jara and a growing interest in Gonzalez.

Signing players off the back of major international tournaments is littered with expensive failures. Karel Poborsky is an excellent example of this when he signed for Manchester United off the back of a good Euro 96.

Poborsky lasted only two seasons at Old Trafford, during which he scored only three goals.His reputation had been built solely on the fact that he scored a single excellent effort against Portugal, and that his team made the final.

El Hadji Diouf and Salif Diao also made big money moves after starring in Senegal’s incredible run to the World Cup quarter-finals of 2002.

Both failed to make the cut at Liverpool, and ended up playing for Bolton and Stoke later in their careers. Andrey Arshavin’s Euro 2008 also duped Arsene Wenger into paying a then club record fee for him.

He started well, but was eventually loaned back to Zenit after struggling to adapt long-term.

Overall, despite the entertainment and stunning performances that they may produce at international tournaments, these players are often attached to a premium far above their true value.

That is not to say that a star cannot be born from an international tournament, but to say that expensive mistakes are more common would no doubt prove more the rule.

Hence long-term scouting and overall performance analysis would more often result in a more rounded signing for the club.