Rangers have announced that on Saturday 17th July 2021, Mikel Arteta will bring Premier League stars like Alexander Lacazette and his Arsenal teammates to Ibrox to kick start the 150th-anniversary celebrations of Rangers Football Club.

Casual football fans, as well as many outsiders, will see nothing more than a glamour friendly, designed to attract a large crowd either in person or virtually, depending on the COVID restrictions at the time, and to generate a media interest and revenue through ticket sales and merchandise.

To those of us though who know and love the history and traditions of Rangers Football Club, or Arsenal Football Club for that matter, the announcement of this game is a nod to the long-standing friendship and history the two clubs share.  The question some may ask is where that friendship originated from and just how much of a role has each club played in the other illustrious history?

Many believe the origins of the North London and South West Glasgow friendship stems from the bond between legendary club managers Bill Struth and Herbert Chapman, but links between the two sides go back even further.

Arsenal founder David Danskin invited Rangers to Invicta Park in South London for a friendly in 1892. Rangers triumphed 3-2 but inside forward James Henderson, who had been part of Rangers title-winning season in 1891 (a title shared with Dumbarton) would sign for the Gunners almost immediately after the match.  It would prove to be an inspired signing as Henderson finished as Arsenals top goal scorer in their inaugural league season, scoring 18 goals as his side finished 9th in the then Second Division.

By 1908 Arsenal were financially in trouble.  In 1910 Woolwich Arsenal, as they were then known, attempted and failed to launch a new share issue.  To add to their problems, attendances were falling, indicative of the poor social economics of greater London at the time.

With the club in the financial pearl, the Football League demanded a meeting with the board and rumours began circulating that Woolwich Arsenal may soon cease to exist.  Further to this, there was interest from both Chelsea and Tottenham Hotspur to absorb Woolwich Arsenal, a nightmare scenario for the club and their supporters.

Arsenal was of course, extremely grateful. In contrast to Arsenal at the time, Rangers were enjoying a particularly successful period under Wilton. In 1899 the Club became a limited company, changing Wilton’s position from Secretary to Manager.  In his time as a manager, William Wilton won 8 league titles and several cup competitions.

The purchase of shares in Arsenal by Rangers proved to be the catalyst for a new era.  By 1913, despite being relegated, Arsenal had moved to North London.  Their new Arsenal Stadium, commonly called ‘Highbury’, had a signature grandstand, the East stand and had been designed by Scottish architect Archibald Leitch. Leitch had been involved in many stadium designs during that period including Ibrox.

In 1928 he built a new grandstand, the South Stand, or ‘Main Stand’ at Ibrox Park.  The two grand designs had several similarities, particular the grand marble staircases which still stand in both structures today despite Highbury’s conversion by property developers and the years of redevelopment to Ibrox.

By the end of the decade George Morrell moved on from Arsenal and William Wilton tragically died in a boating accident.  As the 1930s began two legendary managers were at the helm of both Rangers and Arsenal, Bill Struth and Herbert Chapman, respectively. The early ’30s saw great success for both clubs. Rangers won the Scottish cup in 1930 and Arsenal won the FA Cup the same year.  The following season both clubs won their domestic league titles in 1931 and repeated the twin success in 1933.

In fact, it was the 1933 title success that initiated a friendly ‘Game of Champions’ between the two.  Rangers would win both ties that September, 2-0 at Ibrox and 3-1 at the Arsenal Stadium.  The following two games would end in a draw before Arsenal recorded their first victory in the tie, winning 2-1 at Highbury.

In 1934 Dr James Marshall, who had played with Rangers since 1925, joined Chapmans Arsenal as a medical appointment had caused him to move to London. Despite negotiations going on for some time, Dr Marshall only played a handful of games for Arsenal before moving to West Ham United after just one season.

The regular fixtures between the two sides would be interrupted by the onset of the second world war, although both clubs continued to play in the controversial war leagues.  Icelandic international Albert Gudmundsson briefly played for Rangers during the later stages of the war and then Arsenal upon the conclusion of the conflict.

Whilst studying in Glasgow he represented Rangers in 1944 before signing for Arsenal as an amateur in 1946.  Less than a year later though the well-travelled forward signed for Italian side AC Milan.

The fixture was resumed in 1951 when Rangers travelled to North London to play under the recently installed floodlights at Highbury. A photo from that match took pride of place in Highbury and is still a famous image among football fans to this day.

In May 1963 Arsenal honoured legendary Welsh Goalkeeper Jack Kelsey with a testimonial against Rangers. Kelsey’s career had been cut short the previous year when representing his national side against Brazil.  Kelsey attempted to save a shot at the feet of Brazilian Vava and injured his back in the process. He attempted to revive his career but the injury proved too much to overcome. The testimonial match finished 2-2.

A further 3 games were played during the 1960s but the next significant encounter would be held at Ibrox Park in August 1973 to mark Rangers centenary year.  The early ’70s saw European success for both clubs, Arsenal winning the Inter-Cities Fairs Cup in 1970 and Rangers the Cup Winners Cup in 1972, so, despite being a friendly, the match was considered a clash of two of Europe’s premier sides.

However, the match was described as a nostalgic, fun-filled occasion.  There were many guests of honour, including former Gers keeper Alex Newbigging, then 97 years old.  Derek Parlane opened the scoring for Rangers before late goals from Charlie George and John Radford would seal the win for Bertie Mee’s visiting Arsenal.

After a couple of matches in the 1980s Arsenal would return to Ibrox park for another significant game in August 1996.  It was the turn of Richard Gough, who had previously played for Tottenham Hotspur, to be honoured with a testimonial match. The game was played in front of over 40, 000 fans as Bruce Riochs side, which included Ian Wright, Paul Merson and Ray Parlour were beaten 3-0 by goals from Ally McCoist, Peter Van Vossen and Jorg Albertz.

Rangers re-paid the favour at the other end of a campaign that saw Walter Smiths side win their ninth consecutive Scottish League title. A bomb hoax caused Nigel Winterburn’s testimonial kick-off to be delayed by an hour but approximately 20, 000 fans were entertained to a 3-3 draw when things finally got underway. Dennis Bergkamp and Ian Wright scored three goals between them to put the Gunners, now managed by Arsene Wenger, 3-1 up at half-time after an early Ally McCoist goal. Paul Gascoigne and Peter Van Vossen got one each in the second half to finish the scoring.  England manager Glenn Hoddle was expected to be at the game to watch over recently recalled Paul Gascoigne, but he failed to appear.

In August 2003 Scottish champions Rangers welcomed Arsenal back to Ibrox and the Gunners ran out 3-0 winners with goals from Lauren, Edu and Sol Campbell.  Despite being a disappointing result for the Gers, it was hardly a surprise in hindsight as Arsenal would finish that season not only as Premier League Champions but as invincible.

In Rangers starting line up that night was future Arsenal player and current boss, Mikel Arteta, who at the time was being heavily linked with a move to Spanish giants Atletico Madrid. On the bench for the Gunners was Dutch internationalist and former Rangers star Giovanni Van Bronckhorst, who Wenger had signed for in a deal believed to be worth around £8 million.  Also on the bench for the visitors, that evening was a young Francis Jeffers who would later have a largely forgettable spell in Glasgow.

The most recent encounter between the two was in the 2009 Emirates Cup. Rangers had been invited to the tournament along with PSG and Atletico Madrid.  Both Arsenal and Rangers won their opening games setting up a final showdown between them. Arsenal won the match 3-0 to win the pre-season tournament in front of a crowd of over 50, 000.  This is Rangers only appearance at the Emirates stadium to date.

Arsene Wenger was always a keen admirer of Rangers and was willing to do transfer business with the club, offering young players the chance to continue their development on loan in Scotland.  Gideon Zelalem, Jon Toral and Kyle Bartley all enjoyed spells with Rangers, the latter being remembered for his battling and physical approach to the game.

In 2012 Rangers were in the midst of their own financial crisis. Rangers owner Craig Whyte made the decision to sell those historic shares in Arsenal to a consortium called Red and White Holdings, headed by Alisher Usmanov.  The sale, which saw £230,000 allegedly paid into one of Whytes other companies, angered Rangers supporters who believed Whyte was attempting to strip the club of its heritage. Prominent Rangers figures like Ally McCoist and John Greig spoke of their disgust at the sale with Greig saying he was “deeply saddened” by the events.  Whyte would later claim he never understood the historical importance of the shares but it was too little too late, the damage was done.

Rangers fans groups have lobbied for the shares to be returned in one form or another but strict FIFA guidelines prevent one club from directly owning or part owning another. These shares were only previously allowed because of their historical status.

In much more recent days, many Rangers fans have taken to support Arsenal over their Europa League encounter with Slavia Prague.  The support came after Prague players and fans racially abused Rangers star, and former Arsenal youth player, Glen Kamara.  The offending player, who has been found guilty by UEFA, did not feature in the match, but Arsenal’s victory was celebrated by Gers fans all the same.

The upcoming match itself will be a much-celebrated occasion.  It is hoped this will be the first time Rangers fans will be permitted entry to Ibrox since the COVID pandemic began and will serve as a chance for the players to celebrate the historic 55th league title with the supporters.  Arsenal will now face Villareal in the semi-finals of the Europa League so they themselves can still finish the season strongly following last seasons FA cup victory.

A historic and deeply storied bond will write its next chapter in July and many involved will be hoping the harmony between both clubs will grow and continue for many more years to come. 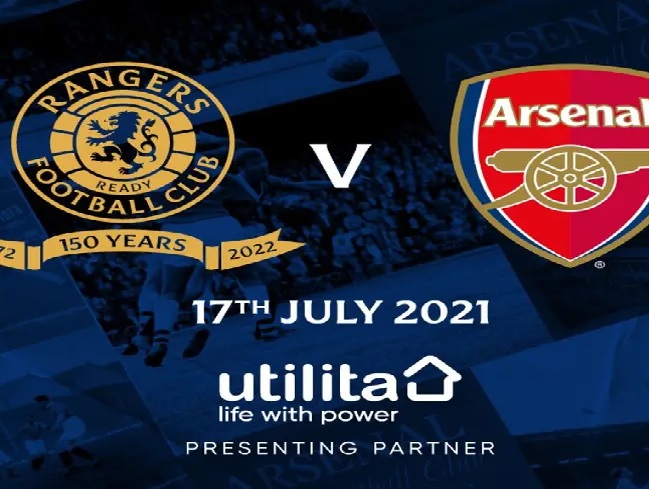