The WWE have confirmed that the Ulitmate Warrior has passed away aged 54, the former Wrestling champion whose real name is James Brian Hellwig appeared at WrestleMania 30 and Monday Night Raw, just before his death on Tuesday.

He was inducted into WWE’s Hall of Fame at Sunday’s WrestleMania 30 and he gave a speech on Monday Night RAW. According to reports on TMZ the Wrestle Legend was walking to his car with his wife before 6pm on Tuesday when he suddenly fell to the ground.

“WWE is shocked and deeply saddened to learn of the passing of one of the most iconic WWE Superstars ever, The Ultimate Warrior,” WWE announced on its official website.

“Warrior began his WWE career in 1987 and quickly went on to become one of the biggest stars in WWE history. Warrior became WWE Champion at WrestleMania VI, defeating Hulk Hogan in an epic encounter.

“We are grateful that just days ago, Warrior had the opportunity to take his rightful place in the WWE Hall of Fame and was also able to appear at WrestleMania 30 and Monday Night Raw to address his legions of fans.

The Ultimate Warrior was known for his high-energy ring entrances, which featured him racing into the arena at full speed, bursting into the ring, and violently shaking the ropes up and down.

He was also known for his distinctive pattern of face paint.

Superstars Triple H and the Rock from the WWE posted their tributes on twitter:

Loss always has a way of reminding us to live and love as greatly as we can. My prayers and strength to his family. RIP Ultimate Warrior.

Saddened to announce the passing of the Ultimate Warrior. Icon and friend. My sympathy to his wife Dana and his daughters

The Ultimate Warrior made a speech on Monday Night RAW in which he spoke of  hearts “beating their final beat”.

He said in a dispatch from the ring:

“No WWE talent becomes a legend on their own. Every man’s heart one day beats its final beat. His lungs breathe their final breath. And if what that man did in his life what makes the blood pulse through the body of others and makes them bleed deeper and something larger than life then his essence, his spirit, will be immortalized.
By the story tellers, by the loyalty, by the memory of those who honor him and make the running the man did live forever.

“You, you, you, you, you, you are the legend makers of Ultimate Warrior. In the back I see many potential legends. Some of them with warrior spirits. And you will do the same for them. You will decide if they lived with the passion and intensity. 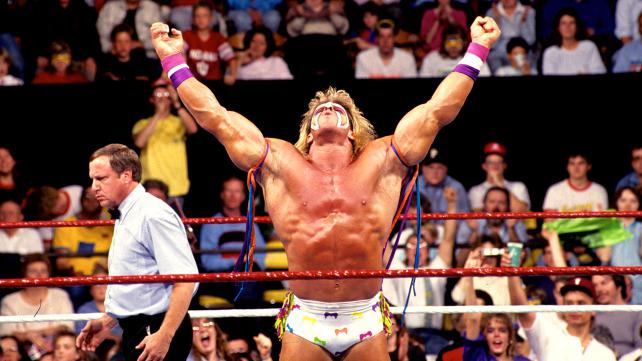