Marcin Gortat averaged 13.2 points per game and 9.5 boards aper game while Hibbert averaged 10.8 points per game and 6.6 boards per game. Gortat so far in the playoffs has outplayed the struggling Hibbert and will look to give him fits in the playoffs. It should a great battle to watch between these great centers, but I’m giving the edge to Gortat due to Hibbert’s recent struggles.

This matchup is another exciting battle in the series. David West and Nene are both top power forwards in the league. Nene averaged 14.2 points per game and 5.5 rebounds while West averaged 14.0 points and 6.8 rebounds; very close statistically. Due to Nene’s size and strength, I’m giving the slight edge to the Wizards.

Small Forward:
Paul George vs. Trevor Ariza
Edge: Pacers
This is only position that I’m giving the Pacers the edge here. Paul George is an all-star while Trevor Ariza is a solid role player.

Point Guard:
John Wall vs. George Hill
Edge: Wizards
Another no-brainer. John Wall is one up and coming players in the league. He is poised for superstardom. He should probably devastate George Hill this up and coming series.

Bench:
Edge: Indiana
Both of these teams are not known for their benches. The Wizards statistically during the season were ranked 27th in the league for bench scoring while the Pacers were 16th. With Evan Turner and Luis Scola coming off the bench, I’m going with the Pacers. 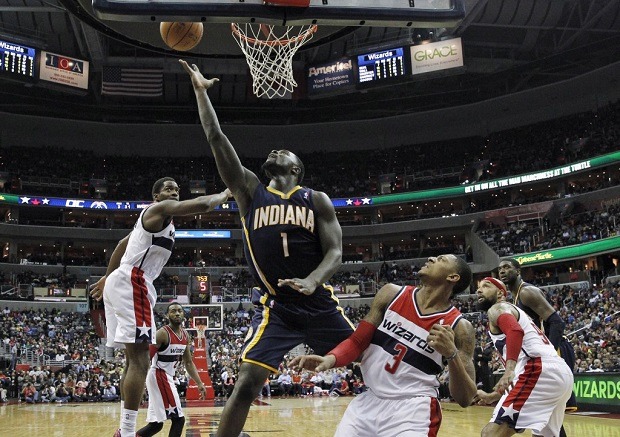