This week’s edition of UFC Fight Night featured four stoppages out of the six fights on the main card. To say there was never a dull moment would be an understatement. Occasionally, the bouts that don’t make it to pay-per-view fail to live up to the excitement of their big-venue counterparts. That was not the case tonight. There’s a lot to unpack here. Without further ado, let’s get into it!

During the build up to this fight, Rob Font stated that he grew up watching José Aldo’s fights. In actuality, Aldo is only one year older than Font. However, Aldo grew up in Brazil and was forced to drop out of school to become a professional fighter before graduating high school. Font, on the other hand, grew up in the United States and did not get involved in mixed martial arts until his mid twenties. Due to these circumstances, Aldo had already achieved acclaim in the sport while Font was still a novice.

Font started off very active in round one. Aldo weathered the storm and eventually forced Font to retreat. An overhand right by Aldo with ten seconds to go in the round sent Font crashing to the mat. If there were more time in the round, Aldo surely would have been able to score a stoppage. Round two almost looked like an instant replay of the first round. Font was the more active of the two fighters but it was Aldo who landed the power shots and caused the most damage.

In round three and four, Aldo showed that he could not only strike with power, but he could also control the fight with grappling. Both men had their moments of effective striking as well; by the end of round four, Aldo’s right eye was swollen shut and Font’s left eye was closed as well. At the beginning of round five, Aldo sent Font crashing to the mat with an overhand right. Font was clearly spent and Aldo could have gone for the finish if he wanted to. Instead, he opted to end the fight with additional ground control time. It was an entertaining bout and both men were given a standing ovation from the crowd for their efforts. Ultimately, the judges awarded Aldo with a unanimous decision victory.

Brad Riddell and Rafael Fiziev once worked at the same gym, helping to train younger fighters. They were known to be good friends by people “in the know” in mixed martial arts circles. Rumor has it, that when the fight between the two of them was proposed they refused to accept it without speaking on the phone first. After a short conversation, reassuring each other that the bout was strictly business, each camp called the UFC officials to confirm the fight was a go. That’s a nice story, but I have trouble believing it went exactly that way. It’s hard to imagine up and coming fighters turning down an opportunity to fight on the main card at the Apex Center, no matter how tight their bond is.

In round one, both fighters relied heavily on kicks. The only highlight came when Riddell put together a nice striking combination with around ten seconds to go. Neither man was able to inflict significant damage on his opponent. Round two was fairly even, but Fiziev had the biggest moment of the round. He was able to open a huge cut over the left eye of Riddell before the end of the round.

With the fight potentially tied at one round apiece, Fiziev decided he would take the outcome out of the judges hands and override the scorecards with his actions. He placed a beautifully timed backwards spinning wheel kick on Riddell’s face. Riddell was knocked unconscious and referee Herb Dean immediately called an end to the fight. During the post fight interview, Fiziev hilariously called out actor Vince Vaughn, who was sitting ringside, to be his next opponent.

Jimmy Crute was the favorite going into this match. That was largely due to the fact that Jamahal Hill suffered a gruesome dislocated elbow during his last bout. It’s hard to imagine a fighter performing well the very next time he steps into the octagon after something like that. However, that’s exactly what Hill did tonight.

This was by far the shortest fight of the night. Hill immediately hit Crute with a right hook that sent him to the mat. Crute got back up right away but never fully regained his balance. Within 30 seconds, Hill hit Crute with the exact same shot, this time knocking him out on impact. The referee was left with no choice but to stop the fight.

Leandro Santos opened round one like a man on a mission. Not only did he send Clay Guida crashing to the mat with a barrage of strikes, he took advantage of his good fortune and pummeled his opponent with a viscous ground and pound attack. Guida defended himself just enough to let the referee know not to stop the fight. Honestly, if Guida were not such a respected veteran of the octagon, the fight would have been stopped anyways. The fact that he was given a chance to continue only speaks to the equity he’s built up during his years of competition.

Round two was a completely different story. Guida went for a takedown as soon as the round started. He caught Santos off guard; he was clearly still exhausted from the energy he spent in round one. Once they were on the mat, Guida was able to put Santos in a rear naked chokehold and force him to tap out. It was a stunning turn of events that seemed completely unlikely at the beginning of round one. It just goes to show an athlete should never give up prematurely; as long as you’re still competing you never know what can happen.

Going into tonight’s bout, Brendan Allen and Chris Curtis were considered two of the best prospects in the middleweight division. In round one, their contrasting styles were on full display. Allen hit Curtis with a number of good kicks to the body that seemed to do a measurable amount of damage. Curtis countered with well-timed calf kicks that prevented the round from being completely one sided. Allen scored a takedown and tried to put his opponent in a leg lock but Curtis’ defense was enough to prevent a stoppage and survive the round.

Chris Curtis’ striking combination to begin the second round was a thing of beauty. He started with a right jab, which placed Brendan Allen on his heels. He followed with a left handed body shot, which clearly hurt his opponent. Finally, he ended the combination with a right hook that landed squarely on Allen’s jaw. He added a knee to the body and a knee to the face for good measure. Referee Herb Dean rushed in and stopped the fight. It was an impressive second round TKO for Curtis; he looks like a serious prospect to look out for in the talented middleweight division.

Mickey Gall is known as an elite grappler. However, he is also known as a below average striker. If he was going to have any chance against Alex Morono tonight, he was going to have to score takedowns and dominate the fight with his wrestling skills. Unfortunately for the Gall camp, he decided to play it safe and did not attempt a takedown until there was one minute left in the third round. Morono cruised to victory by outpointing Gall with well-timed strikes for the majority of the fight. The judges granted him a unanimous decision victory for his efforts.

No matter which sport is being discussed, cardiovascular fitness will always be an essential component of preparation. I don’t mean to take anything away from Clay Guida; he earned his victory fair and square. However, if Leandro Santos had put in the work and come into the fight in shape, he would have left the octagon victorious. The mistake he made was underestimating Guida because of his age. Just because Guida turns 40-years-old this month, doesn’t mean he’s not a worthy opponent. Santos ran out of gas. Anyone who watched the fight could see that. Let this be a lesson to young athletes everywhere. There is no substitute for conditioning!

Fight fans are in for a treat next week as reigning lightweight champion Charles Oliveira puts his belt on the line against highly touted challenger Dustin Poirier. The pay-per-view event will be live from the T-Mobile Arena in Las Vegas. The atmosphere is sure to be electric and there will certainly be plenty of stars in attendance. As always, we’ll have all the latest updates about the outcomes of the fights as well as in depth analysis available right here at World In Sport! 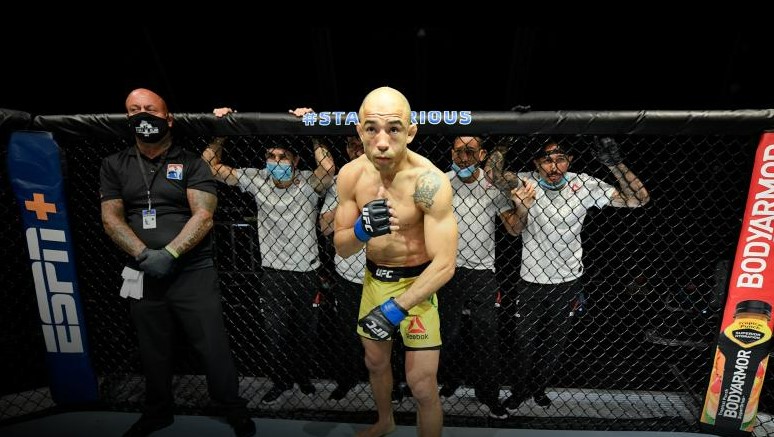