Entering tonight’s main event, Arnold Allen’s most notable victory came against Dan Hooker. Tonight, the featherweight from The United Kingdom showed the world why he is one of the fastest rising contenders in the division. In the first main event of his career, Allen looked ready and unintimidated by the moment or his opponent, Calvin Kattar. Although UFC Vegas 63 had an anticlimactic ending, Allen made the most of his opportunity inside the octagon. There’s a lot to unpack here; without further ado, let’s get into it!

From the opening bell, Arnold Allen became the aggressor, advancing across the octagon and forcing Calvin Kattar to backpedal. At the 1:30 marker of the first round, Allen’s tactics paid off in the form of a nice flurry of punches that landed and gave him solid control of the fight. In the final 30 seconds of the round, Allen landed a left strike that sent Kattar crashing to the mat. Allen attempted a chokehold but Kattar was able to survive the round.

As he fell to the ground, it was clear that Kattar’s right knee was experiencing some stability issues. After his corner asked him if he was okay, the ring doctor approached Kattar, but he waived him off and insisted that he wanted to continue.

At the beginning of round two, Arnold Allen landed a calf kick to Calvin Kattar’s left leg. Attempting to backpedal and put pressure on his right leg, Kattar’s right knee gave out immediately and he went crashing into the mat. It was obvious that the injury stopped his ability to continue and the referee immediately called a stop to the fight. Arnold Allen was declared the winner. Although the injury may have soured the moment, Allen should take solace in the fact that he performed well and look great throughout the fight!

Welterweight veteran Tim Means began his bout against Max Griffin by relying on calf kicks and mid-level body kicks. However, Griffin seemed prepared for these tactics and defended against them quite well. In the second half of the round, Griffin landed a huge strike that sent Means crashing to the mat. He then pounced on Means and hit him with a barrage of elbows. However, Means is a savvy veteran and he was able to gather himself, stand to his feet and survive the round.

In the beginning of round two, both fighters were relatively cautious and did not throw the same volume of kicks and strikes they threw in round one. However, as the round progressed, Means picked up his activity level and began throwing and landing more strikes. Means looked to be in control for the majority of the round but Griffin landed a devastating right hand in the final minute that sent him crashing to the mat and may have swayed the judges in his favor.

Understanding that the fight may very well be tied on the judges’ scorecards, Griffin became more aggressive to start the third and final round. He started the round with a well-timed takedown and followed that with nearly three minutes of ground control time. Means would not be discouraged. He fought to his feet and scored a takedown of his own in the final seconds of the round.

This was a close fight and the judges’ decision reflected that. Ultimately, Griffin was awarded a split decision victory. In a fight this close, a few moments could win a fighter the match. Griffin’s right hand at the end of round two, and his three minutes of ground control time in round three are the moments that most likely determined the outcome of this fight. It just goes to show that it’s best to apply constant pressure and remain the aggressor. If Means had been more aggressive and active, the judges may have scored the fight in his favor.

Waldo Cortes-Acosta was once a baseball player who aspired to reach The Major Leagues. Rumor has it, that when he was a member of the Cincinnati Reds organization, he could throw a 92 mile-per-hour fastball. However, he has decided to put those days behind him and focus on mixed martial arts. Now, he is one of the most exciting prospects in the heavyweight division.

Jared Vanderaa had lost five out of his last six fights entering this contest and there were loud rumors that this would be his last bout in the UFC if he could not emerge victorious. He relied heavily on calf kicks and hurt Cortes-Acosta several times. Cortes-Acosta began limping around the octagon because his left leg was so damaged by Vanderaa’s kicks. However, throughout the course of three rounds, the most damage inflicted was caused by Cortes-Acosta’s strikes. Vanderaa absorbed the punishment well but was never able to match the output.

Cortes-Acosta was awarded a unanimous decision victory by the judges. He is a well rounded athlete but he is going to have to work on his defense if he wants to become an elite fighter. Right now, his striking is impressive, but if he does not learn to defend against kicks, and incorporate some grappling into his arsenal, he will not be able to compete against the top fighters in the division.

Middleweight prospect Tresan Gore scored an immediate takedown against Josh Fremd in the opening minute of their bout. Although Fremd eventually fought to his feet, Gore was able to execute an emphatic body slam at the three minute mark of the round. Fremd was lucky to survive.

At the beginning of round two, Fremd attempted an ill-advised takedown and Gore used his expertise to turn the maneuver into a front-facing guillotine chokehold for himself. He took Fremd to the mat while securing the hold and held his grip until Fremd passed out in the octagon. It was a dramatic submission victory and one of the most impressive chokehold maneuvers the sport has seen in a while!

Light heavyweight Khalil Rountree started round one by throwing big looping punches that Dustin Jacoby was able to easily avoid. After the two men settled down, they both began relying on calf kicks to score points. As the round progressed, Jacoby became the more active fighter. He landed a flying knee in the final minute of the round; Rountree responded with a well-timed jab that visibly stunned Jacoby before the bell.

In round two, Rountree became more active, throwing his left jab and landing with great accuracy. Jacoby attempted a takedown in the final minute of the round, but Rountree’s defense held steady and he was able to prevent himself from going to the mat. In the opening minute of round two, Rountree threw a left jab that landed flush on the face of Jacoby. This set the tone for the rest of the fight. In the final minute of the round, both men threw caution and defense to the wind and began throwing punches with reckless abandon!

Ultimately, Khalil Rountree was awarded a split-decision victory. His decision to increase the activity level in rounds two and three paid off; at the end of round one it looked as if Dustin Jacoby was on his way to victory. It just goes to show that “It ain’t over ’til the fat lady sings!”

Arnold Allen is a serious contender in the featherweight division. Calvin Kattar is one of the most respected names in the division and Allen was ready for the moment. It would be unfair to create a narrative focusing on Kattar’s injury; Allen outperformed him through the duration of this fight and that’s what fans should remember. Arnold Allen wants a shot at the reigning champion Alexander Volkanovski. Win, lose or draw, tonight showed that Allen will not be intimidated.

The UFC returns next week with another edition of Fight Night from The Apex Center in Las Vegas. The main event of the evening will feature women’s strawweight contender Marina Rodriguez versus octagon veteran Amanda Lemos. You won’t want to miss it! As always, we’ll have all the latest updates about the outcomes of the fights, as well as in depth analysis available right here at World in Sport! 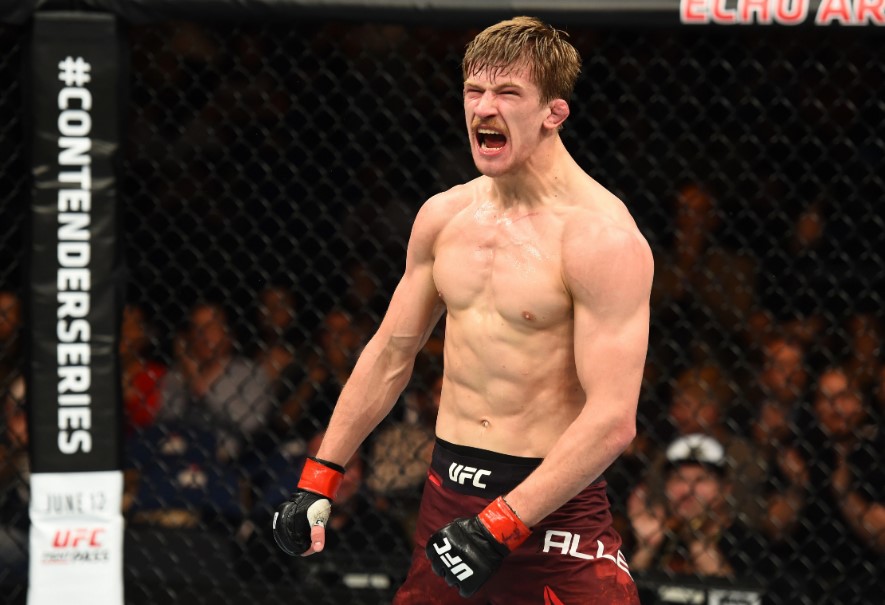