What a game India had against the arch rivals Pakistan at Eden Gardens, Kolkata. The game started late because of rain and wet out field. The overs also were reduced to 18 over pre side.
India won the toss and Dhoni had not hesitation to choose to bowl first.

Pakistan was to off a decent start. They didn’t give any wickets in first 5 overs. Nor Ashwin and Nehra gave India the break through. It was Suresh Raina’s part time off spin who the first Pakistani wicket of Sharjeel Khan for 17 runs.

Then Bumrah join the party, he picked up the price wicket of Shehzad for 25. After the openers fell, the responsibility was on the skipper Boom Boom Afridi, but in need of quick runs skipper gave his wicket away to Hardik Pandya.

The captain could score only 8 runs. Till this time Indian bowlers were up to the mark. They created the pressure and got wickets in regular intervals. The experience of Shohaib Malick and aggression of Umar Akmal took the pressure away from Pakistan.

The duo batted really well and all the bowlers were hit all over the ground. Umar and Shohaib entertained the Kolkata crowd with their batting.

At the end Umar fell to Jadeja and few balls later Shohaib too was out to Nehra.

But these two batsmen did a decent job and helped the Pakistani bowlers to defend a decent total.

Rohit could score only 10 runs. He gave his wicket to a normal bowler called Mohd Amir. This is the second time that Amir picked up Rohit for a low score.

Later, Sikhar joint Rohit in the pavilion. Dhawan could manage to score only 6 runs. He was bold by Sami.

Sami picked up two wickets in that over. Raina also couldn’t trouble the scorers. He scored his first duck of his in 59 twenty20 innings. It was 23 or 3 at one stage; India was totally on the back foot. With extreme pressure Yuvi and Kohli steadied the Indian ship.

This was the second time in a row where Yuvi and Kohli saved India. The first instance was in Asia Cup 2016.

Their 61 run partnership took the pressure away and brought India back in the game.

Kohli scored a magnificent half century. But Yuvraj lost his wicket after contributing 24 runs.

Pakistan missed the extra spinner. All the Pakistani bowlers were expensive. The overs from Afridi and Mallik changed the game to India’s favour.

India would be hoping to repeat the same performance throughout the tournament.

Man of the Match – Virat Kohli for his 55 not out. He is the India’s chase maestro. He averages 100 while chasing. The average by any batsman in second innings of a T20 match.

India’s next match is on 23rd March against Bangladesh at Bangalore, Chinnaswamy Stadium. 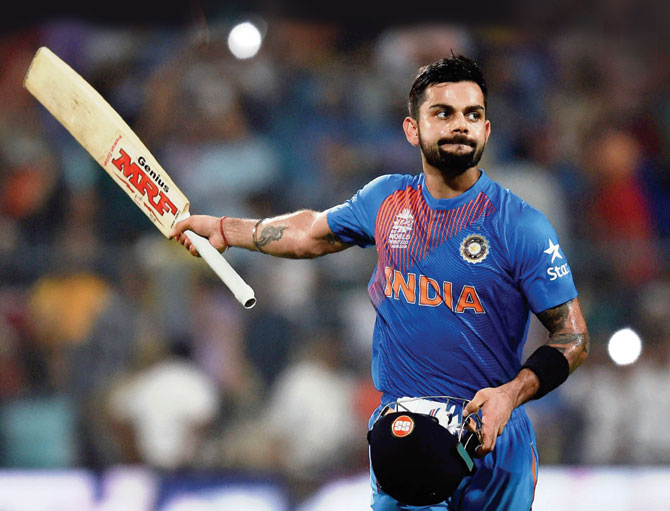