This is something else.  When you get to see bullet-time action of breakdancers, gymnasts and parkour athletes you realize just how much skill is involved in these amazing moves. It makes the gymnastics coverage you see on the TV seem almost mundane by comparison (and that’s only comparatively, of course!).

Here the True Movement crew shows off their skills while PermaGrinFilms captures the epic performance with a 20 camera GoPro Array and a Red Epic at San Diego United Training Center. If you are wondering just how these superb athletes can jump up so high (without it being a special effect!) it is because they are able to soar by using an AirTrack Mat. The foam pit seems angry, spitting blocks at the athletes as they tumble through the air.  It’s no wonder that the film is called Breaking Gravity.

Although parkour is categorised as a holistic training discipline, this video makes me wonder why it isn’t classified as a sport in its own right.  As it uses only the human  body and what happens to be around for propulsion and may include obstacle courses, climbing, swinging and running – among other strenuous activities – is it not different enough to gymnastics to perhaps be taken more seriously as a sport?

Maybe it would not thrive, as it does now, if that happened – after all it allows the participant to decide on what movement is deemed most suitable for the given situation and as such perhaps lacks the strictures of gymnastic events, bound as they are to certain movements and apparatus. 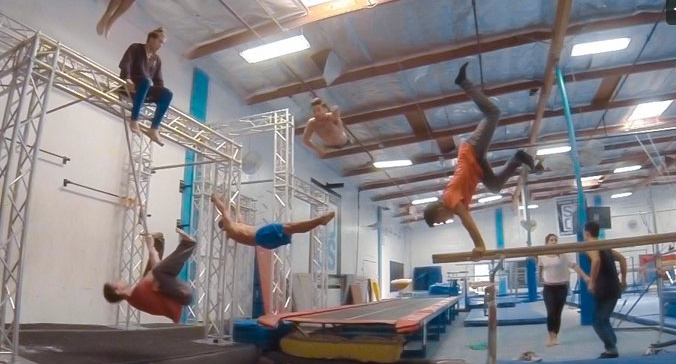