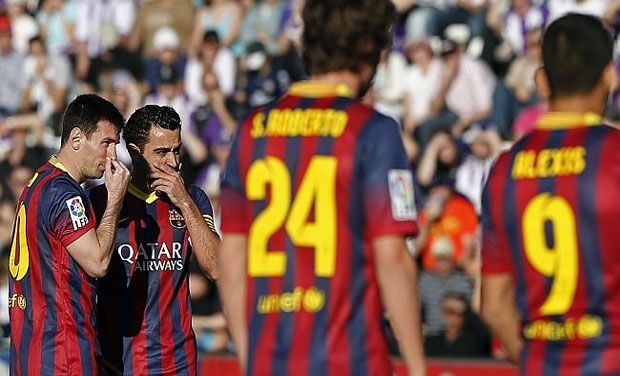 FC Barcelona is coming towards the end of one of the clubs worst season’s in recent memory. With the recent transfer ban being postponed for at least the summer as the case will go to court, Barcelona has a great chance this summer to come back stronger than ever.

The defence along with a new goalkeeper will need to be the priority. With injured current goalkeeper Victor Valdes and his replacement Pinto both plan on moving on after this season, a goalkeeper is a must.  Marc-André ter Stegen from Borussia Mönchengladbach looks to be the favourite to take over the starting goalkeeping job.

Ter Stegen has everything you need from a goalkeeper:  agile, reliable, quick, and not afraid to come of his line.  However, I feel his main strength is his reflex saves.  Only 21 this signing makes great sense. Ter Stegen looks to be one of the best young goalkeepers in the world and can be the long term replacement for Victor Valdes.

The defense is where things get tricky and extremely smart purchases need to be made.  The defense of Barcelona has been the only weak point in traditional and recent Barca sides.  If Barcelona can finally strengthen its Achilles heel they may finally be a complete team.
A deal for long term target Mats Hummels looks to be close to done. If reports from Madrid-based newspaper Diario AS are anything to go by, the struggle may soon be over as it has been rumoured that FC Barcelona search for a central defender has come to an end.

Remember, this is just speculation, but reports suggest that Barcelona have reached an agreement to bring German international Mats Hummels to the Camp Nou. Hummels is an ideal partner for Gerard Pique in the center of defense. This could create potentially the best center back pairing in all of Europe.

There are probably more naturally defenders out that would sort Barcelona’s play style better. The idea of Thiago Silva in a Blaugrana jersey is certainly appealing, but barring a drastic change of heart from either the player or his club, Silva will remain in Paris for the foreseeable future.

Hummels would make a great signing. He is terrific defending 1 V 1, aerially is world class, and reads the play and makes interceptions as good as anyone around.  He also is a very good passer of the ball which is essential for any member of the Barcelona squad.

David Luiz is also an option.  He has been linked since last summer and is one of the most likely to move to the Camp Nou.  Either Mats Hummels or David Luiz are MUST sign players for Barcelona to strengthen the defense.

The outside back spots are less of a concern. Dani Alves can prove to be a liability sometimes but is overall a solid outside back and is probably the best in the world going forward. Attacking fullbacks are crucial to Barcelona’s 4-3-3 formation as they spread the field and get forward on almost all attacking sequences.

Jordi Alba is extremely solid at left back and will undoubtly be the starting left back. Adriano and Montoya will prove to be back ups and squad rotation players.

The genius midfield of Barcelona might be needing a tune up in its famous engine. The likes of Xavi, Inestia, Busquets and Cesc Fabergas are the usual midfield conductors. Although this midfield has been unplayable in the past, it has become somewhat slow and has lost its spark, especially this season. I would like to see all four of these midfielders stay with Barcelona.

All have come from La Masia and are pivotal players and leaders in the squad.

I believe we need a new defensive mid who may not be a starter straight away, but can provide competiton to Busquets. A player like Javi Martinez from Bayern Munich would be ideal. Strong on and off the ball Javi Martinez is a physical presence who can distribute passes and tackles.

Originally from Athletic Bilbao, he knows the La Liga well and is a Spanish international, who knows the Spanish style of play. At Bayern, Martinez has failed to establish himself as a first team regular at Alianz Arena and he has only made 15 league appearances this season under Guardiola.

And while he might be tempted by the prospect of joining Barcelona, negotiating a transfer fee with Bayern could prove to be a very difficult task. Martinez has all the physical attributes of becoming a dominant midfielder.

Good in the air owing to his height, he is tenacious and a good passer of the ball. He has no particular weaknesses, and is only bound to get better with age.

If David Luiz is brought in alongside another center back, he could also do a job in the defensive midfield role like we have seen at Chelsea.

I’m not sure how I feel about the next player recently linked to Barcelona as a defensive midfielder Chelsea’s Ramires.  Ramires has emerged as a surprise target for Barcelona this summer. The Catalans are said to admire the Brazilian’s tenacity and speed in midfield.

Ramires has notched 27 goals and 17 assists in 119 appearances for Chelsea – impressive statistics given his style and defensive diligence in midfield. Barcelona possess a plethora of intelligent passers who’ve been schooled in the Spanish club’s tika-taka philosophy, so Ramires’ brand of football could be seen as a much-needed alternative for the Barcelona midfield.

Overall in a nutshell for the defensive midfield spot at Barcelona I am more than happy with Sergio Busquets and believe he is one of the most underrated players in the world.

He has a brilliant footballing mind and is the ideal Barcelona defensive midfielder. I just think that there needs to be more competition in that spot, and sometimes we do need to freshen things up in the middle.

The last position in Midfield where I think Barcelona need some improvement is in an attacking role. As mentioned before the genius midfield of Barcelona has lost some of its spark and could use a young deceptive and creative player to lighten up the play.

Only Iniesta of the 4 midfielders tends to take people of the dribble; which opens up space to play.

The first attacking mid I would target would be Manchester City playmaker David Silva. Silva who is already familiar with the Spanish style of play due to his national team experience plays the necessary style to fit in at Barcelona.

Silva is an excellent footballer who is equally at home as a conventional winger, a wide man in a front three or in the hole behind the strikers. A sprightly dribbler with a creative eye, Silva is a master at teeing up his teammates. Dynamic, exciting, fluid, a real livewire; David Silva could be the perfect player to liven up the midfield.

His creative flair allows him to unlock a defense and he is versatile enough to make an impact right across the width of the pitch, while he can move in on goal himself.

His extraordinary vision is also a gift to behold. What really impresses me about the young Brazilian is his work rate, both equally offensively and defensively. As soon as his team loses the ball he can be seen running mad getting the ball back.

His defensive work rate will work perfectly in the Barcelona philosophy. Creative, tricky, skilful, a flair player who can unlock a defense; I firmly believe Philippe Coutinho could be a huge success at the Camp Nou.

In attack, Both Messi and Neymar should and will be certain starters. Pedro and especially Alexis Sanchez could be on their way out. Sanchez has become increasingly frustrated in his second fiddle role. A rumoured argument with head coach Tata Martino after Martino refused to start him in the Copa Del Rey final vs Real Madrid indicates Sanchez may well be on his way out. A rumoured move back to Italy is on the cards with Juventus being the most likely of destinations for the Chilean attacker.

A leaked list of Barcelona’s summer wish list include Manchester City striker Sergio Aguero. Now, let’s all just take a second and think of a front three of Messi, Aguero and Neymar. A South American trio deemed to be unstoppable seems almost too good to be true.

His ball control and powerful bursts make him almost unstoppable in the box. A fine finisher when presented with a chance, he has a capacity to create in the most difficult circumstances. With 21 games played this season Aguero has impressive statistics with 16 goals and 6 assists.
The deal for the Argentine could prove to be tricky.  Manchester City; not in need of money and desperate to keep hold of their best players in order to continue their development, it would take a willingness of the player’s part to force a transfer, a situation that seems somewhat unlikely.

In addition, Aguero signed a one-year contract extension in the summer, taking his current deal to June 2017. Plus he enjoys a special relationship with City’s fans after playing a crucial role in the club’s first title win in 44 years when he scored the most famous goal in Premier League history against QPR in 2012.  Aguero plays as an inside-winger for Argentina and so he did for Independiente back in Argentina.

He can play anywhere on the attacking front, I think Barcelona will probably end up going with Neymar/Aguero/Messi and will have Aguero and Messi switching from the middle and right wing during the match depending on the needs and what the game calls for. Aguero may like City well enough but the chance to play with his friend and countryman at Barça would be too good to pass up.

The Transfer Ban given to Barcelona from FIFA was due to illegal signings involving U18 players.   The ban has not been lifted, but sensibly, it’s been suspended. Such a suspension is entirely logical.

This means that this window should be a seen as a key time to make big moves, because Barcelona may be limited in the future. There are two problems with this – one, it’s a World Cup summer and that can inflate prices and create a distraction that slows down deals. Second, it means Barcelona have to pull the trigger now even if the deal is not optimal – they can’t wait another window to see if there are better options available then.

With that said, Barcelona doesn’t have much of a choice.