Skip to content
You are here
Home > Cricket > What Next For England After Ashes Whitewash? 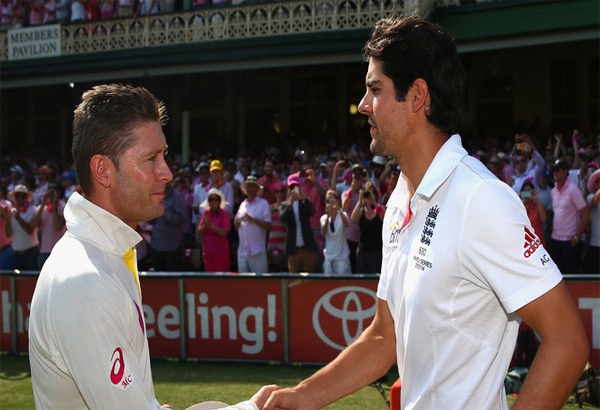 A little over two months ago, England arrived in Australia looking to win their fourth successive Ashes series but the large majority of the test team will head home with their tails firmly between their legs.

Prior to the start of the first test match at the Gabba, England were the favourites to retain the urn but after being demolished in Brisbane by Australia, they were never able to recover against a relentless home side. England were finally put out of their misery in Sydney last weekend as they were outclassed again by an Australian team determined to record that 5-0 score and make amends for the previous three Ashes defeats at the hands of the old enemy.

Australia had shown signs of life in England last Summer, despite losing 3-0, and they duly proved themselves to be a different team this time around back on home soil, compared to those that had lost on countless occasions to England in recent years.

The returning Mitchell Johnson was the difference right from the first test match, with his ferocious pace and bounce ripping through the England batting order like a hot knife through butter. The England batsmen were unable to deal with Johnson throughout, with the 32-year-old walking away with the man of the series award after picking up an excellent 37 wickets!

Johnson looked a new man this time around compared to the wayward bowler of old that the ‘Barmy Army’ often loved to mock with a now infamous song. Even the fiercest of England fan will now admit that Johnson was the main difference between the two sides with his pace was simply too hot to handle. Johnson was ably supported by the excellent Ryan Harris and the workmanlike Peter Siddle, who never gave the England batsman a minutes rest. Nathan Lyon too provided Michael Clarke with a nice spinning option for the Aussies who constantly managed to pin down the England batsmen who were never able to play their natural game.

The other star man of the series for Australia was undoubtedly Brad Haddin who once again showed what an important part of the team he is. Coming in at number seven, Haddin ended the series with a batting average of 61.62, the highest from either team, but more importantly he produced the goods when Australia needed them the most. His first innings knock of 94 in Brisbane was a particularly vital one with England having blown away the Aussie top order, but as the tourists would find out on numerous occasions during the series, Haddin was on hand to perform the rebuilding job.

England lurched from one crisis to another during the series with Jonathan Trott leaving the tour after the first test match and Graeme Swann retiring after the third test, two particular low points. Those two departures were clearly big blows to the team but that cannot be blamed for the way England batted on a consistent basis from Brisbane through to Sydney.

Only twice during the ten innings of the series did England pass 300 which is a remarkable stat for such and experienced and successful team. Alastair Cook, Ian Bell and Kevin Pietersen have 68 test tons between them but none could manage a single one in Australia, with all three finishing the series with averages under 30. The only bright spark from an England batting point of view came from young Ben Stokes who scored a wonderful 120 in Perth on just his second test match appearance.

England will leave Australia with plenty of questions as they look to rebuild their team with a view to regaining the urn on home soil in 2015. Question marks surround Coach Andy Flower and Captain Alastair Cook while the future is uncertain for the likes of Jonathan Trott, Kevin Pietersen and Matt Prior among others. No such questions exist for Australia who will now have designs on continuing their domination during the ODI series, before they fly to South Africa for what could be the best test clash of 2014.

Next up for England is a series of one day and Twenty20 games Down Under where they can look to restore some pride but as far as their test performances go, they must wait until the Summer when Sri Lanka and India provide the opposition as the team look to rectify everything that went wrong in Australia this Winter.

has published a new mt_pp."John Mc Kenna"
6 hours ago