When Willo Flood moved to Aberdeen from rivals Dundee United, many questioned if money motivated his move to a team that finished lower than Dundee United many saw it as a step down. However, it is quite evident that the industrious midfielder moved to join an Aberdeen team that were very much on the up in Scottish Football, Willo found silverware in his first season at Pittodrie, while many Arabs still hold a grudge against him.

The 29 year old was born in Dublin and learnt his trade playing for Leinster Senior League club Cherry Orchard, a club that have produced other players such as Jon Daly, Connor Sammon and Stoke City’s Glen Whelan.

After playing in various youth squad with Manchester City he eventually made his first team debut in a European Cup tie aged 18 against Welsh side The New Saints on the 28th of August 2003.

After only playing 12 matches in total for City Willo went out on loan to Rochdale and Coventry City playing 33 matches in 2 seasons with an injury plagued season at Rochdale in 2004.

At the end of the 2005-06 season it was clear that Willo was out of favour at Manchester City and he looked west for a new challenge in the shape of Cardiff City, who signed him for £200,000

Willo again found himself struggling to make an impact in games. When he did find himself playing in the first team it was at right wing, and if people watch him these days you can quite clearly see the aggressive midfielder doesn’t play like a right winger.

The 5’6 defensive midfielder found it hard to settle at Ninian Park and joined Scottish Premiership side Dundee United on a season long loan for the 2007-08 season. In Flood’s first two appearances for United he was sent off in both, his second for taking a free kick quick when the referee had not allowed it.

However, after a few matches in the SPL he impressed greatly with his all action displays in which he would cover every blade of grass. The following season Willo again signed a full season loan deal with Dundee United and kept consistency, when in previous seasons he had struggled to do.

After two impressive seasons in the SPL Willo’s contract was up with Cardiff City, so he decided to continue in Scottish Football, only this time to Scottish giants Celtic. Willo’s only 6 months at the hoops was a frustrating one playing only 6 times and going down in history as one of Celtic’s poorest signings.

In 2010 along with team mates Barry Robson, Scott Macdonald and Steven Macmanus Willo Flood joined former Celtic manager Gordon Strachan at Middlesborough. After impressing at the start of the season Willo picked up an unfortunate injury and failed to make another appearance for Middlesborough when he was shortly told he would be released.

In May 2011 Dundee United once again saved Willo’s career as he signed a two year contract. In the 2011-12 season Willo was not as effective as he had been in his previous stints at the Tannadice club.

However, as the following season drew to a close Willo Flood was playing arguably the best football of his choppy career as he helped Dundee United finish in the top 6 for the 6th year in a row.

On the 31st of May 2013 Willo signed a pre contract with Dundee United’s rivals Aberdeen joining former team mate Barry Robson as manager Derek McInnes looked to build a team that could reach Europe.

In the 2013-14 season Willo finished 3rd in the Scottish Premiership qualifying for Europe and winning the Scottish Communities League cup Final on penalties against Inverness at Celtic Park. Willo Flood will now be looking to build on his own personal progress he has made this season while also hoping to help Aberdeen reach the Europa League group stages.

@Mackin83  Stevie May does a Willo Flood by missing a penalty against his future employers”. 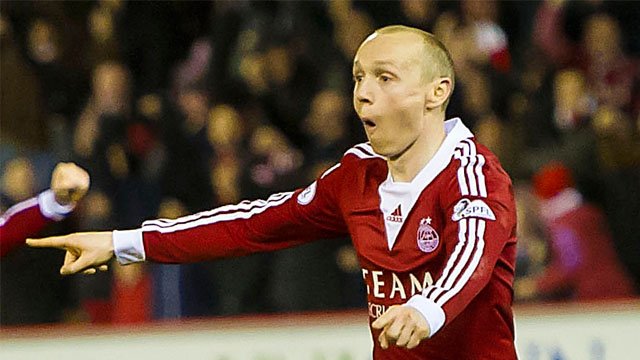