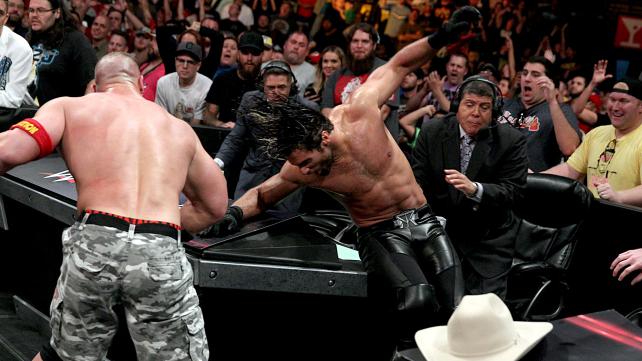 These days for some it’s become a lot harder to watch WWE programming.

So much so that WWE’s former head of creative writing Vince Russo wrote an open letter to Vince McMahon regarding how hard it is to watch the product for three hours on a weekly basis. There are a number of things that hurts WWE’s product on a whole, such as the fact they alienate certain portions of the audience or the fact that they feel the urge to push a certain wrestler much more vigorously than the rest of the roster. The thing that does the most damage to WWE’s product is the lack of originality that is on show.

The writers with the WWE right now are a far cry from the ones that were present with them during the attitude and ruthless aggression era, back then the writing seemed more inspired as if they were trying to make the programming better week after week but now it seems that the writers are lazy and prefer to rest on their laurels. The writing has become rinse and repeat and it relies on silly clichés to advance the show in every aspect, the constant repetition has also lead to horrible decisions regarding wrestlers.

WWE attempted another John Cena and Randy Orton feud even though it was completely played out in 2009 and needless to say it was met with a chorus of boos when the feud came to a head at the Royal Rumble earlier this year. This was a sign that the audience was bored with seeing the same thing over and over however the message wasn’t received by creative, instead they resorted to another cliché which is still present on their programming. WWE has a bad habit of using distractions during a match, there has been too many times when a wrestler has sat on commentary during a rival’s match and waited for their rival to take control of the match before causing a distraction, it’s happened so much that when a wrestler is sat on commentary the crowd already know what’s going to happen.

WWE is known for throwing their championships around however the way they have done this has not only harmed the show but it has damaged the reputation of the champions as well. There have been too many one night title reigns and champions who don’t even make it past the first pay-per-view, and the latest victim of this is Dolph Ziggler who lost the intercontinental championship at Night of Champions and won it back a night later on Monday Night Raw. This has been done too many times in the past, fans would easily be able to recall the last time that exact scenario happened with that exact title and that’s a huge problem as it makes the show predictable.

While WWE has tried some new things the problem is that it constantly falls back on tried and trusted methods which kill the excitement of the show, the booking decisions also reflect badly on the writers as well as the show and if WWE is looking to make its product better than it’s going to have to step up.