As Philipp Lahm lifted the World Cup in the Maracana Stadium on Sunday night, it was impossible not to look to the future and what it would hold for this young German team. Led by Joachim Low, Germany won the World Cup for the fourth time in their history at the weekend having been the best team throughout the tournament.

In doing so, Germany became the first European team ever to win a World Cup in the Americas and it is easy to see why with their pace, skill and power on a different level to the rest of the countries in Brazil for the tournament.

Argentina were worthy adversaries in the final for Germany but they were unable to take their chances when they came which left the door wide open for their European rivals. Just when the game seemed to be heading for the inevitable penalty shoot-out, Mario Gotze popped up in the box in the 113th minute to produce a sublime finish after some excellent control on the chest.

It was a worthy goal to win any match from the substitute who was described as a ‘Miracle Boy’ after the game by Coach Low with the Bayern Munich forward a shining symbol of the future for this young German team.

Argentina spent only seven minutes in a losing position during the World Cup but unfortunately for them that came in the last seven minutes of the World Cup Final. The success of this Argentina team was based on a rock solid defence with Lionel Messi pulling the strings going the other way.

The Barcelona superstar scored some stunning goals in the group stage before appearing to tire slight in the latter stages of the tournament although he did walk away with the Golden Ball for the best player at the tournament.

Argentina suffered with injuries to key players like Angel Di Maria and Sergio Aguero which clearly hindered their chances although they, along with Messi, should have at least another tournament in them which should ensure that they will remain a threat on the world stage going forward.

Moments after the final whistle at the Maracana and before the World Cup had even been lifted, Germany were already installed as the 11/2 favourites to defend their title in Russia four years from now and it is easy to understand why.

Only two players in their World Cup winning squad are aged over 30 and that is a frightening thought with the likes of Mesut Ozil, Mario Gotze, Thomas Muller and Toni Kroos all likely to be even better when they arrive in Russia in 2018.

Add to them the likes of young Julian Draxler who hardly got a kick in the World Cup and Marco Reus, who missed the World Cup through injury, and you have a recipe that should see them in good shape for many years to come.

The Bundesliga is going through a purple patch at the moment with Bayern and Dortmund flying high and that has clearly had an impact on the quality of the national team.

They will be hoping that continues going forward over the coming years with both teams currently producing a conveyor belt of young German talent at the moment which is filtering through to the International side.

Joachim Low already has a contract that will take him through to the European Championships of 2016 and they have to be favourites for that title after their World Cup success.

The majority of their major rivals are currently undergoing something of a transitional stage which is certainly true of Spain, while the likes of Italy and Brazil are also going through something of a dip when it comes to competing at the very highest stage which leaves the door open for the Germans to dominate for years to come.

The 2014 World Cup Final will be remembered as the day that this young and exciting Germany team came of age and proved themselves to be the best team on the planet. They were comfortably the strongest nation at the tournament and under the brilliant tutelage of Joachim Low, they conquered Argentina to loft the trophy.

It was the end of a long journey for Germany which started after they lost all three games at Euro 2000 and few begrudged them their success at the Maracana with the best team coming out on top when it matters.

It was Spain who had dominated World football from 2008 through to 2012 with three major tournament wins but maybe, just maybe, it is the turn of this young German side to take over at the top of the International tree. 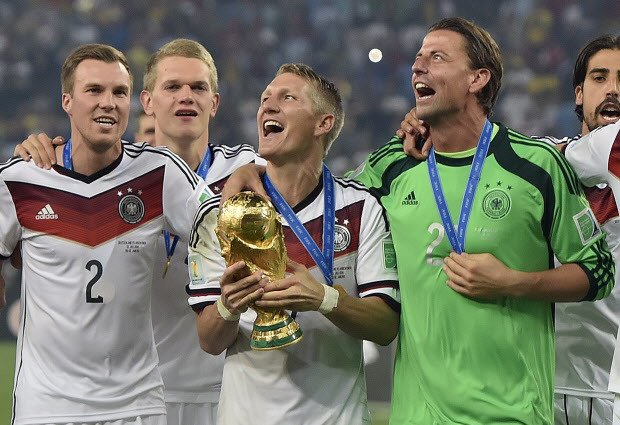